The Taco of the Town - The Bend Magazine 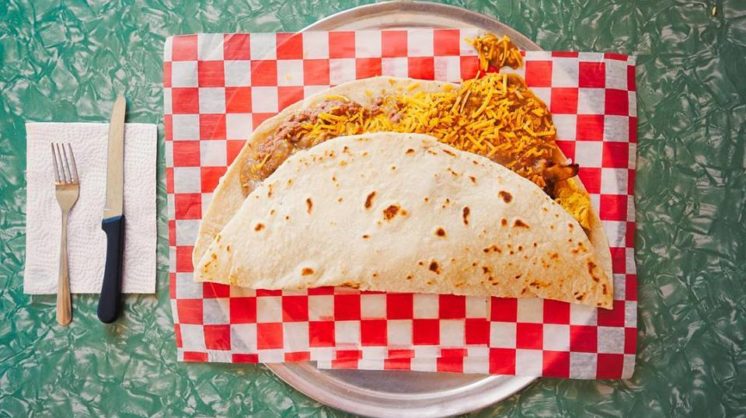 By: Julieta Hernandez   Photos Courtesy of: Tacos of Texas and Robert Gomez

The tacos of Texas are about as diverse in regions as they are in ingredients. Officially titled “Taco Journalists” Mando Rayo and Jarod Neece have been tasting the culture of tacos as its evolved through the great cities of Texas. The seven episode docuseries has visited Austin, Houston, Rio Grande Valley, and San Antonio so far — naturally, Corpus Christi comes next.

The breakfast taco is a righteous choice for our sparkling city and will be explored in the Corpus episode with the Almighty Chacho’s Taco (Chacho’s breakfast taco of nearly 4 pounds!), Hi-Ho, and a conversation with the TacoCreative scene in town. “It’s what kind of taco represents that city the best, and the story behind it,” says Gerald Flores, designer and taco lover with TacoCreative, who also helped with the production of the docuseries. “They’re also talking to local creatives in how we try and keep the culture alive. It’s great to see it.”

Flores has been on the taco tour with Rayo and Neece as part of the production team.

The docuseries reflects not only on specialty tacos of each region, but also becomes an outlet to local issues and a platform for the diversity of the latinx families who’ve created these recipes through generations.

“It’s great to showcase the different styles of tacos in Texas and share the stories of the tacos, but most importantly, they are about the people that make them, the culture, and our traditions,” says Mando Rayo, Series Producer.

Through the Indie Lens Storycast, a youtube channel in partnership with PBS Digital Studios, Rayo and Neece, along with director Dennis Burnett, have been on a taco tour through some of the biggest cities in Texas. The series’ cultural education aspect talks about the deeper fillings in taco culture and the tie with local issues specific to each city. Recess Bar and Grill is going to be hosting a watch party on the evening of October 23rd to premiere the Corpus Christi episode of Tacos of Texas. Pre-screening, you can enjoy tacos y musica. There’ll be even more tacos y musica after the 8PM screening as well.

If you’re feeling hardcore about your taco pride, Chacho’s Tacos is bringing their Almighty Taco and hosting the challenge right there and then with an opportunity to win a gift pack form the Tejano Justice League and Tacos of Texas.

To find out more about the docuseries, visit http://www.tacosoftexas.com/. To watch it, check out the first three episodes on StoryCast: http://www.storycastdocs.com/.
Share