The Surprising Sweetness of Cabbage - The Bend Magazine 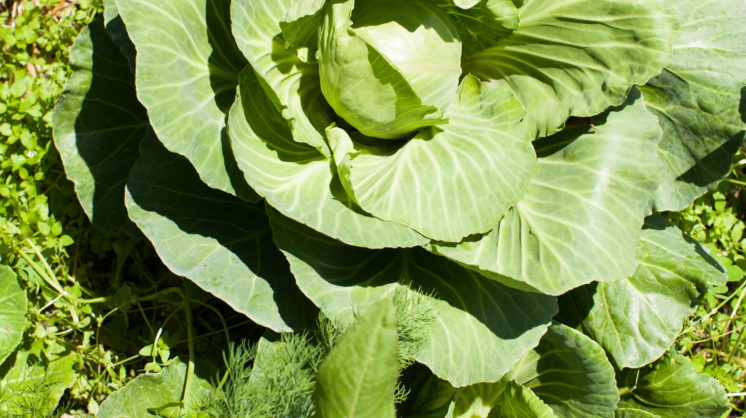 When celebrated plein-air painter Carol Koutnik visited our farm, she thought the most gorgeous vegetables in the garden were the cabbages. She went on to produce the critically-acclaimed exhibit “The Fantastic Garden,” with cabbages as the star of the show. A Need to Know Basis

Growing Up
Plant in full sun in earliest November. Grow only in well-drained, heavily composted soil. Mix six cups pastured poultry manure and two cups homemade wood ash into the soil per plant –cabbages are heavy feeders. Water deeply and infrequently; keep soil slightly moist. Plant dill, thyme, and sage near cabbages to prevent cabbage moth pests. Harvest when tight heads form by clipping plant at the lower stem. Wrap the head in the large leaves at the base of the plant to transport or store.

Profiling
“Early” versus “late” are terms used in northern gardens with cold winters. Up north, cabbages are planted at the end of winter. Early cabbages mature quickly, have small heads, and split at the first sign of heat. Late cabbages mature later, have large heads, and can take some (northern) summer heat. In the Coastal Bend, cabbages must be planted in the fall and harvested during winter, or they will either bolt or split. To extend harvest, plant some early and some late varieties.
Local Recs
Cabbage can be served warm or cold; cooked or uncooked. When it comes to cabbage, its culinary options are endless. Three varieties that are locally grown are: Red cabbage, Napa cabbage, and green cabbage. Red cabbage is typically used for its color, adding a nice pop to any dish. Napa cabbage is great for wraps due to its mild taste and large green leaves. Green cabbage, the more common, lends itself to great soups and sides.
– Joel Trevino, Dagon Produce, @dagoncctx
Fun Fact
Cabbages were the most frequently sold vegetable at markets in Colonial America. Every farmer near a city grew this cash crop to sell in town. The best farmers were the Pennsylvania Dutch. These so-called Dutch farmers were immigrants and their descendants from Germany (Deutsche was misunderstood as Dutch). The best farmers of all were the Amish, who had fled religious persecution in Germany and come to America seeking freedom of worship. The Amish of Pennsylvania are still among the best farmers in America.
Share