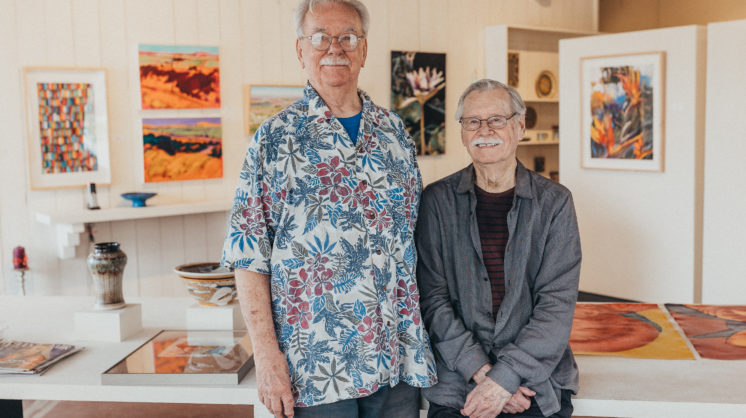 You don’t have to personally know William Wilhelmi to have been introduced to and influenced by his work. Chances are, however, either you do know him personally, or it would likely take fewer than six degrees of separation to realize a connection. But knowing Wilhelmi and knowing his work are two separate things. What we all tend to think about when it comes to artists – that they possess an all-consuming, non-compromising view of their work that makes the label “starving artist” sound less of a threat and more like an aspiration – are the exact sentiments that make Wilhelmi’s story and rise to iconism the outlier.

As a person who seamlessly floats between his two worlds, artist and individual, Wilhelmi has always seen the duality of his personas in a “church and state” kind of way; more effective operating as two entities rather than blurring them together. It is this notion that has made him so successful over the years. His ability to accept praise and criticism isn’t tied to who he is when the opening night of an exhibition ends, the gallery lights dim, and he’s back in his studio – garage door ajar, making acquaintances with the folks who call N. Chaparral Street home from time to time. That is to say, Wilhelmi has never been about the glitz and glam of a successful artist’s life. His main goal has always been problem-solving, and when he achieves the solution for a self-imposed creative challenge, or one presented to him by a client commissioning a piece, it is then he allows himself a sliver of self-satisfaction. To understand Wilhelmi as an artist today, we must first look back at key moments in his life. He served in the Navy before attending San Diego State University, where he majored in mathematics. As a part of the degree track, he had to take a variety of art classes, discovering he was actually quite good with a variety of art forms. He unearthed a natural skill for art, and was praised highly for his work very early on. The positive reinforcement from his professors prompted a more deliberate pursuit of a career in art.

However, for a time after finishing his bachelor’s degree, Wilhelmi grappled with what to do next, and while he knew he didn’t want to go into teaching, that was the opportunity presenting itself at the time. “I’m not a teacher,” Wilhelmi says, recalling this story. But he’s never been one to shy away from a clear direction in which the universe points him, so Wilhelmi dabbled in teaching (reluctantly), and took the first chance he got to pivot into a different job. At that point he found himself designing window displays for Sears. But the store criticized his tendency to focus the displays on the art, rather than letting it fade into the background and giving the merchandise the spotlight. Wilhelmi felt that the art and the fashion could coexist. Time would eventually tell that, in fact, he was on to something. Using works of art to enhance and support the progression of a project, the sale of clothing, the richness and reality of a theatre production’s stage set … Wilhelmi zeroed in on the problem and used his art to fix it.

While his time in the Navy was a defining period for him, much of the routine and rigidity required of service members laid new foundations for how he would end up approaching his art. Wilhelmi still credits his in-depth study of mathematics as the basis of his problem-solving skills, though he says, “as to where one gets its beginnings, I don’t think anyone really knows.” He is an example of a person who has recognized his strengths and operates solely by staying true to what he knows and does best. “Anyone can just crank out pieces and put them on the shelf to sell or populate an exhibition,” he says. But that’s not Wilhelmi. He doesn’t create the work for himself; he creates for you. For me. For his community of collectors and longtime friends.

There is a certain degree of happenstance in Wilhelmi’s career. In fact, he would say his career has been completely unplanned – by which he is utterly humbled. The organic nature of his career and life advancement is what ultimately led to the meeting of Wilhelmi and Ben Holland, a now iconic Coastal Bend art scene duo.

In 1970, Holland came to Corpus Christi, from his hometown of Harlingen, to become the theatre director at The Little Theatre (now known as Harbor Playhouse). It was during the production of The Odd Couple, where Wilhelmi had been working on designing the set, that they met for the first time. Their artistic visions and complementary talents were quickly realized, and once the show closed, they have remained working together ever since. Holland is the (other) genius behind each of Wilhelmi’s curated exhibitions, having a hand in which pieces are a part of which shows and the design and layout of the gallery spaces in which they are to be on view. It was Holland who also began giving Wilhelmi’s pieces names. Prior to that, while Wilhelmi’s aesthetic had become undoubtedly recognizable, much of his work remained untitled. Just as it’s been natural for Wilhelmi to problem-solve, for Holland, naming artwork and designing and curating shows has been an innate expression of his artistry.

For a working relationship, or any relationship for that matter, to sustain the amount of years that Wilhelmi and Holland’s has is commendable. “He has his space and I have mine,” says Holland. “I own the gallery, he owns the studio.” The gallery shows quite a bit of work from local artists and occasionally artists from farther away, but all Texans. However, the true legacy of the gallery is for showing Wilhelmi’s work.

In Wilhelmi’s solo exhibition at the Art Museum of South Texas (AMST), currently on view through Nov. 28, the museum presents objects and pieces that have rarely been seen publicly. “As a fervently collected artist, Wilhelmi’s works are often seen briefly when first exhibited by the Wilhelmi/Holland Gallery,” says Deborah Fullerton, AMST’s curator of exhibitions and long-time close friend to “Bill and Ben.” Honoring the partnership of Wilhelmi and Holland through the past five decades, this exhibition “acts as an introduction to and dialogue with the artist, rather than a retrospective,” explains Fullerton. Typically, at this stage in an artist’s tenure, the art world wouldn’t be wrong in anticipating a contemplative show depicting a beginning and an end. But Wilhelmi isn’t there yet. It doesn’t escape either Wilhelmi or Holland that the years they can reflect upon outnumber the ones that lie ahead. But for a creator whose path in advancing in his art was wholly built on unpredictable circumstances, his response to the assertion that this exhibition may be his last is “Never say never.”