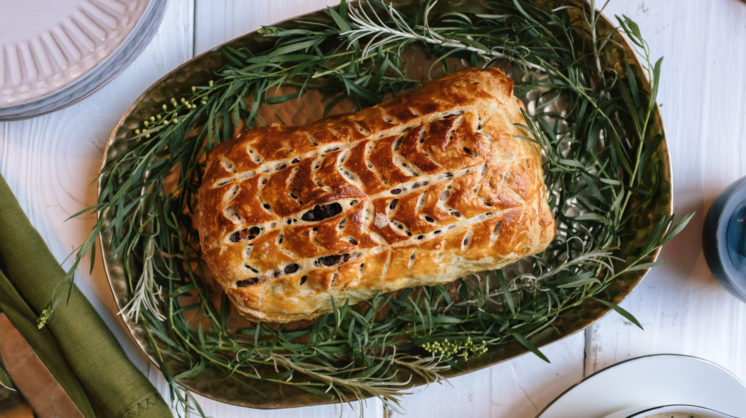 Beef Wellington is an iconic British dish. It also happens to be identical to the French filet de boeuf en croute. To complicate matters, this French dish with a British name was popularized not in England, but in America! So, what’s the story with Beef Wellington?

In the early 1800s, filet de boeuf en croute was a classic French dish served at the tables of the wealthy. The main ingredient, filet, or tenderloin, was the most expensive cut of beef. The rich duxelles (finely chopped mushrooms, shallots, onion, and herbs) and delicate puff pastry made this dish a favorite of the French upper-crust.
Then, in 1815, the British general Sir Arthur Wellesley, the Duke of Wellington, issued a stunning defeat to Napoleon at the Battle of Waterloo. According to lore, Wellington’s favorite supper was filet de boeuf en croute. In honor of his great victory, this dish was (supposedly) renamed Beef Wellington.
Here is the problem: There is no corroboration of the Wellington connection, and no mention of Beef Wellington in British cookbooks throughout the 19th century. The first citing of this name does not appear until 1903 in a Chicago newspaper. Beef Wellington was not mentioned again until 1939, this time in a New York City newspaper.