The Neon Underground - The Bend Magazine 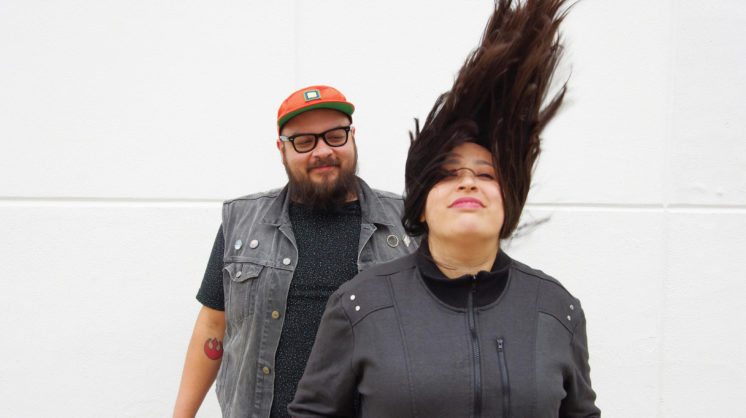 Enter the Neon Underground with Calico Club, a dark, electronic dance duo that creates music that is immersive and will bring you into their world of sound and vision. A world where you can be melancholy and dance all at the same time. They are the self-professed, “soundtrack to your fantasies.” The duo formed in San Antonio and features Calico Club (formerly known as Galacticat) and PleasureFaces. Their music is unique. It’s disco, but it’s also morose, pairing dark tones with bright atmospheric synths, lush reverb drenched vocals, and pulsing drums. They’re a product of their environment, of their time, but most important, the music is as unique as its creators.

“Artistically it started with me as ‘GALACTICAT’ making music, then Kim being featured on songs as ‘PleasureFaces,’” says Calico Club. “As the collaboration evolved, we changed the name to Calico Club.” Their creative process would also change with the name and the two have written all songs together since then.
They began performing live throughout San Antonio and attracted a lot of attention from regional electronic acts. They embarked on a tour with the now defunct band PBLC soon after. Their tour would take them throughout Texas and the Midwest. “That experience helped us grow as musicians and helped us realize what we wanted to do with the band,” says Calico Club. “We wanted to create.” Calico Club released their first EP, Permanent Night, in 2014. The experience of touring and releasing recorded music for the first time would change their creative process yet again. “After we released our first EP we focused on our endeavors as multi-media artists.” The duo has always embraced old technology, opting for analog hardware like synthesizers and drum machines over laptop produced, digital electronic music. When their experimentation as multi-media artists began, it followed this same ethic. “We delved into experimenting with analog video synthesizers and mixers. We have always been fascinated with older technology,” says Calico Club.

Where most artists would find this type of technology archaic, cumbersome, and an overall hassle, Calico Club has embraced its unique sound and look and the unique character that it gives their art. A Calico Club show is a beautiful multimedia experience—a feast for both the eyes and ears. Their shows take on more of an art installation feel, rather than just a traditional concert.
Just as their name and creative process has evolved over the years, so has their base of operations, with the duo now calling the Coastal Bend their home. “The move to corpus was job related,” says Calico Club. “It was an adjustment, as any move is, but we have definitely drawn inspiration from downtown. All the abandoned buildings were a perfect backdrop for our art. Seeing the remnants of some places and understanding there were feet that walked there years before we were ever thought of is wild.”
Calico Club’s live performance debut in Corpus Christi was a statement. February 16th at the NASA let the Coastal Bend know that Calico Club is here to usher in a new era of electronic music and multimedia art, bringing something new and inspiring to the Corpus Christi music and art scene.
Share