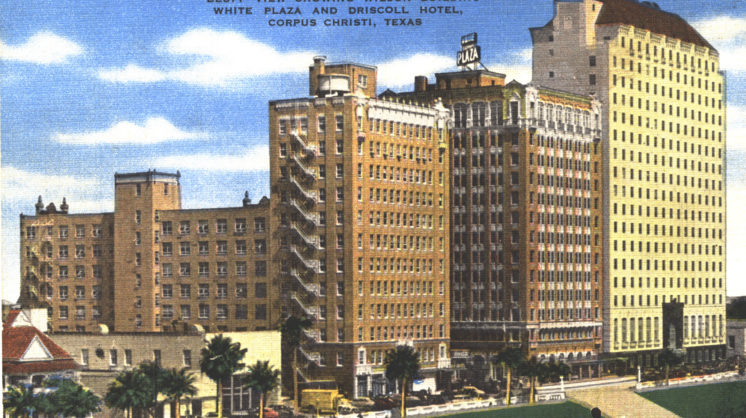 While taller structures have been built in recent decades, it is the sight of three buildings, standing tall along the bluff balustrade downtown, that gives Corpus Christi its identifiable skyline in historic photos. These three—known by various names throughout their histories—were the originals.

The Wilson Building, built as the Nixon Building in 1927, set off the transition of the bluff from a street of stately, elegant homes to a business district. Some of the big names in Corpus Christi’s early history called this stretch home before their homes gave way to its development, as the city boomed with the opening of the Port in 1926.

The center building is labeled the White Plaza in this image, as a reflection of its name change after Jack White, operator of the hotel, bought out the other investors after a contentious legal battle with one of them—Clara Driscoll. She and her brother Robert were principal investors in the construction of the Plaza Hotel, which opened in 1929.

Displeased with the business of the Plaza after Robert’s death, Clara built the Robert Driscoll Hotel next door in 1942. Clara occupied the penthouse, where she could look down on the Plaza. Ultimately, the Plaza was demolished to make way for the 600 Building and the Driscoll Hotel stands today with a black façade, added in 1974.

While names and appearances have changed, people of the future will still recognize three iconic buildings on the bluff when they look at Corpus Christi’s skyline in 2021.