The City's Submarine - The Bend Magazine 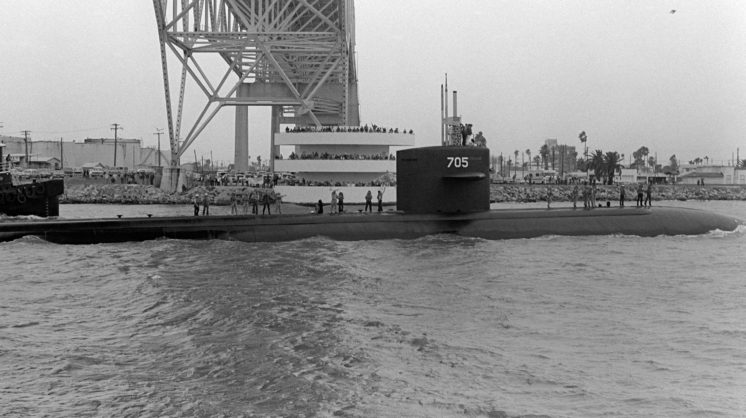 By: Jillian Becquet   Photo Courtesy of: The National Archives, ARC 6420390

It seems logical that a city with a long history with the military would be honored with a military vessel named in its honor. The first was USS Corpus Christi (PF-44), a frigate that commissioned during WWII and served only a few years before it was decommissioned less than a year after the war ended. A helicopter repair ship, USNS Corpus Christi Bay, served from 1965 to 1974.

As the fleet of Los Angeles-class submarines grew in the 1970s and ’80s, they were each named after an American city, and the Navy once again looked to honor Corpus Christi.  However, naming a nuclear-powered fast attack submarine Corpus Christi – or “body of Christ” – wasn’t popular with everyone. Arguing that that name would be more appropriate for a nonlethal vessel, a bill was introduced to the House and the Navy modified the name to City of Corpus Christi (SN-705). The submarine was commissioned Jan. 8, 1983.
The city embraced the honor, and even held an art contest to design the ship’s patch. Crowds gathered to view the submarine’s trip through Corpus Christi Bay, and a lottery was held to issue 4,000 tickets to residents who wanted to tour the vessel. The 361-foot, 11-inch sub and its 110 crewmembers returned to visit its namesake city three more times before taking its final voyage to Pearl Harbor, where it was decommissioned in 2016 after 33 years of service.
Share