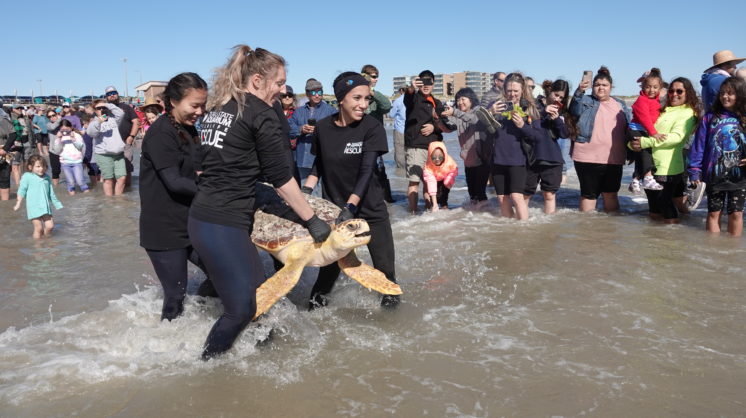 The past few months for Texas State Aquarium (TSA) and its Wildlife Rescue Center have been rather busy due to an increased number of endangered loggerhead sea turtles turning up stranded on South Texas beaches. However, as of November 26, 2022, nine of the endangered sea turtles admitted to the aquarium’s Wildlife Rescue Program between July and September of this year were released near the North Padre Sea Wall.

The recently released turtles were part of more than 40 loggerhead sea turtles that were relocated to the aquarium’s rescue program from other rescue facilities in the region since July of this year. Each of these loggerhead sea turtles weighs around 150 to 200 pounds and was found either injured or exhibiting an indication of ill health or abnormal behavior. Though an underlying cause has not yet been determined, affected turtles have been underweight or emaciated. However, with an increase in loggerhead sea turtles needing help, TSA had to pivot to make more space to accommodate.

Earlier in November, TSA implemented emergency housing to care for the influx of stranded loggerhead sea turtles. Due to the number of sea turtles in need of rehabilitation, the aquarium activated, for the first time in its rescue history, an unprecedented contingency plan to help in rehabilitation efforts. Sea turtle operations were relocated to a building owned by the Port of Corpus Christi, located one mile away from the current rescue center.

“The U.S. Fish and Wildlife Service is grateful to the Texas State Aquarium and Port of Corpus Christi for stepping up quickly with a creative solution,” said Mary Kay Skoruppa, U.S. Fish and Wildlife Service Sea Turtle Coordinator for Texas. “With approximately 125 sick loggerheads needing care in Texas since April, our partner rehabilitation facilities soon reached capacity. Without the quick action from the aquarium and the Port [of Corpus Christi], we would have been faced with transporting loggerheads to out-of-state facilities, a costly operation that would have put additional stress on the turtles.”

After months of care and treatment, these loggerhead sea turtles fully recovered from related health complications thanks to Texas State Aquarium’s Wildlife Rescue Center. The rehabilitation required extensive efforts and coordination from aquarium departments across the board. The aquarium’s Veterinary Team provided expert medical care, including physical exams, bloodwork, x-rays and antibiotic treatments. The aquarium’s Water Quality Team maintained optimal water conditions in the pool; while the Wildlife Care Specialities constantly updated vital statistics for each turtle, including weekly weigh-ins and measurements and prepared special diets to ensure optimal nutrition. Staff also ensured the turtles consumed food and necessary nutritional supplements and performed daily observations to identify any concerns and report whether or not they were alert, responsive and moving through the water normally.

With the combined effort of several aquarium departments and the extra space provided by the Port of Corpus Christi, last week, the veterinary staff announced nine of the turtles were ready to be released back into the wild. Three of the nine were equipped with transmitters to track the turtle’s movements, marine habitat locations and migration routes to help scientists learn more.

“This release is the outcome of our staff’s hard work, dedication, creative setup and fast response,” said Texas State Aquarium President and Chief Executive Officer Jesse Gilbert. “We are grateful to have this unique opportunity to assist partners at U.S. Fish and Wildlife Service and NOAA Fisheries in caring for and housing this endangered species, and we are looking forward to expanding our capacity for this work when the new Port of Corpus Christi Center for Wildlife Rescue at the Texas State Aquarium opens.”