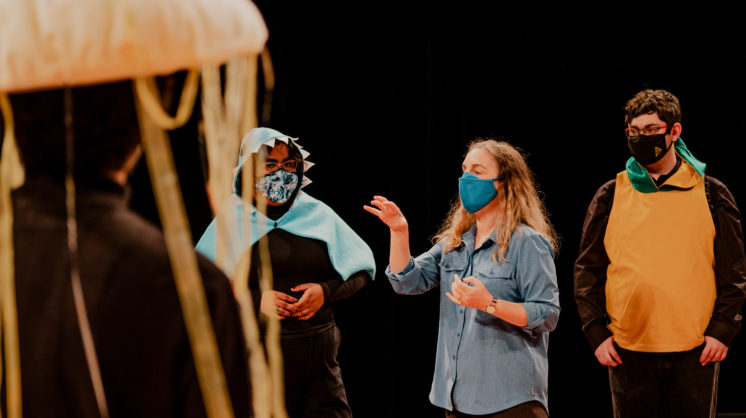 Olivia, a 13-year-old Corpus Christi local, found a sense of empathy for ocean life after learning an important lesson while out fishing on her grandpa’s boat. In a tantalizing tale, she faces a storm of complications she must weather by putting faith in her new sea creature friends. She gains a new perspective on the value of ocean life and the role we play in it by the end of her journey.

Ocean lovers, opera patrons, and children who love a good story are invited through Olivia’s Ocean, a children’s opera produced and performed by a collaboration of departments and institutes at Texas A&M University, commissioned by the Harte Research Institute for Gulf of Mexico Studies (HRI). Through marine research and numerous missions to “ecologically and economically” sustain the Gulf of Mexico, the HRI took an interest in the arts to convey some of their most important messages to the public. The alliance between marine research and musical theatricals became relevant and blossomed, and an original opera became the product.

The opera came to fruition through experienced TAMUCC professors Dr. Ellen Denham and Dr. Ross Bernhardt. Denham wrote Olivia’s Ocean when she combined her science-fiction fantasy writing knowledge and her fascination with children’s operas; to fit right in with it, Bernhardt composed an entirely original, variety-filled score including funk, classical, pop, and waltz influences.

“Why couldn’t we have a children’s opera about ocean sustainability?” says Dr. Denham. “It’s near and dear to my heart: I love birds, I love sea creatures, the beauty of all of it.”

As stage director and writer, Dr. Denham works closely with the vocalists and storyline. In the past year, she was recognized for her talents in stage directing for the American Prize national competition in the performing arts. The non-profit celebrates American excellence in the arts. “So,” she says, “Dr. Ross Bernhardt and I sat down with them [the Harte Institute] and discussed what would be a great takeaway message for children – and for adults, too. We basically came up with the easiest thing for people to do: to not trash the ocean, to try and keep it clean.”

Olivia’s Ocean is projected to reach more ocean enthusiasts by becoming a film opera after their live debut of the show. That’s where TAMUCC professor Daweon Kim stepped in as the film director to ensure camera operation, film editing, storyboarding, and hairline details.

“We are going to use the stage and cameras to record their live performance,” Kim says. “The film form of opera uses film language, with intentional camera movements and a variety of camera angles. Visual effects and split screens also make a huge distinction in film opera from just a stage opera.” Bringing Olivia’s Ocean to a wider audience, considering the circumstances, has led the production to find adaptable ways of translating the experience. The art of the opera is complemented by tactics like kinetic camera work, multiple cameras, advanced light work, and closer, more intimate performances by the vocalists.

As producer and director of photography Scott Thurman says, “We want to capture  and convey this performance in a way that preserves the energy and visceral experience of attending a live show, while delivering an incredibly important message – both cinematically stunning, and emotionally captivating.”

The opera can be viewed online after its live debut on the TAMUCC department of music’s webpage.