Taking It to the Streets - The Bend Magazine 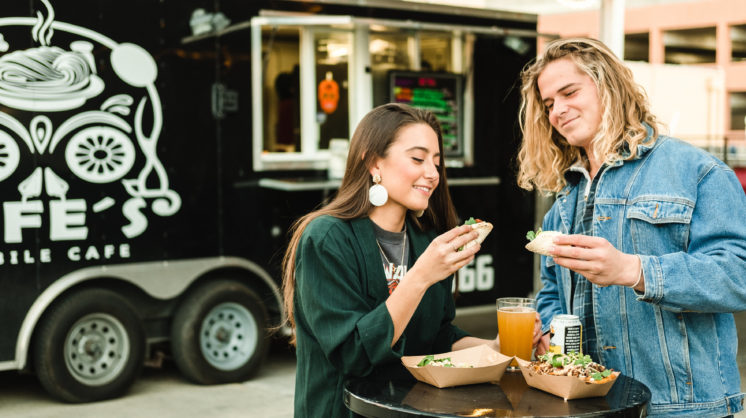 The food truck scene in Corpus Christi has been on the rise for a few years now. Any night of the week, all over town, you can find a plethora of food trucks ready to serve up some delicious eats. At this point, it’s hard even to remember a time when food trucks did not line the streets of downtown, or have a permanent spot in some of the coolest new bars. However, it took major footwork and hoop-jumping (so to speak) for all of your favorite trucks, carts, and trailers to have a presence in our community.

Before the 2017 City Council amendment, the only “food trucks” permitted by ordinance in right-of-way were ice cream trucks in residential neighborhoods. Seeing the need to provide the community with a more innovative and interactive food experience, Alyssa Barrera, Executive Director of the Downtown Management District, says that “the city launched a pilot program to test out different sites around the area, to test the feasibility and projected impact food trucks would have on the community.”

One of the pioneers in coordinating what is now the food truck industry in Corpus was TacoBar Street. In 2012, owner Benjamin Olivares noticed the old-school taco trucks on the west side were serving up delicious authentic foods, but they weren’t accessible to everyone, since they were stationary vendors. Olivares saw this as an opportunity; envisioning taco trucks that could move around and serve at events, provide catering, and best of all, appear at the numerous festivals popping up around the city. To share the wealth, TacoBar Street created and now manages the Facebook group FoodTruck Finder. Many food trucks will post daily about where they are located, what foods they have on deck, and upcoming festivals and community events where you can find them.

Now, with a buzzing food truck community that is only growing more and more, we at The Bend want to highlight some of the local favorites that top the list. TacoBar Street is an infusion of the traditional taco with a splash of Asian influence. The street nachos, a signature dish and crowd favorite, have the all the Mexican flavors we know and love, topped with spicy mayo and a little Japanese seasoning, too.

Olivares officially got his wheels turning (literally) in 2014, after working with the city to create and define permitting for food trucks in Corpus. With the help of Alyssa Barrera, Heidi Hovda at Corpus Christi Visitor’s Bureau, the mobile catering team at Tailfinis, and many other downtown advocates, TacoBar Street has paved the way for what is now a major food truck movement in the Coastal Bend.

Early this year, TacoBar Street plans to open a brick and mortar location near Alameda and Airline.

When you are looking to satisfy your taco craving, find TacoBar Street in the following locations:
Tuesdays – Uptown Frost Bank
Thursdays – Twin Towers on Shoreline
Weekends – Varies*
*Download the Street Food Finder app to find food trucks closest to you, their hours, and menu details.

Hi-Ho on the Go got started when the owner, Rene Garcia, and his father were sitting at their restaurant – a customer came up and asked when they were going to build a restaurant on the south side. Garcia explained that the family had to plans to open a brick and mortar, but instead, they were joining the food truck world to be able to serve wherever the public demands. In the weeks after that conversation, Garcia purchased the food truck.

Hi-Ho on the Go is Mexican comfort food. They make fresh, authentic flour tortillas right there on the truck. Community favorites include chalupas, street tacos, fajitas, and enchiladas.

Outside of the big downtown festivals that the Hi-Ho on the Go team attend annually – St. Paddy’s Day, Fiesta de la Flor, and the Hot Tamale Festival – their food truck can be found on a weekly basis in several locations: The Taste From Across the Pond
Lion’s Den

Lion’s Den is a taste of authentic English cuisine. Owner Dennis Cooper was a member of the U.S. Coast Guard until 2013, when he retired and took a position with the Military Sealift Command based in Corpus Christi. Last year, when the Command Ship left Corpus, Cooper found himself without a job – so he decided to embrace his passion for food, and purchased the food truck that would ultimately become Lion’s Den.

Cooper is originally from England and studied Hospitality and Catering at Cambridge College, City & Guilds. And his accolades are certainly apparent in the dishes he produces: The fish and chips are made with fresh Atlantic cod, the labor-intensive bangers and mash aren’t afforded any shortcuts, and from grinding the meat to stuffing in the natural casing to making the British gravy, every step in the process is handled with care and precision.

His proprietary creation is the British Banger Burger. Made fresh from scratch daily, this is the real deal, and the Lion’s Den is the only establishment in the entire U.S.A. to serve this burger at the moment. Choose the “Ultimate” option and top your burger with an egg and hickory bacon for an experience that will have your taste buds thanking you. The local favorites are the Cod Fish and Chips and the “Tornado Potato,” a spiral-cut large potato, fried with a wide variety of seasoning. When one sells, it is not long before many customers request a Tornado Potato of their own.

Lion’s Den can be found at most local events and festivals throughout the year, and will be venturing out to other coastal bend counties in 2019. The food truck is also busy providing catering for private events for birthday parties, reunions, weddings, and other special occasions. Food for the Soul
Nona’s Cocina

Nona’s Cocina has only been open for a little over a year and a half and has already gained a tremendous following with nothing but rave reviews. The mastermind behind the restaurant is Erica Franco, who immigrated to the United States from Victoria, Mexico in 2014. She came equipped with a genuine love of cooking and a treasure trove of family recipes passed down through generations. What started as a catering gig soon turned into Nona’s Cocina, and Erica has been serving up delectable food ever since.

Initially, Nona’s exclusively sold food through the Howard’s BBQ drive-thru. They quickly evolved their business into a food truck and now have a brick-and-mortar restaurant in the Hamlin Center. This permanent fixture on the corner of Doddridge and Staples has become one of the newest (and trendiest) places to stop and grab a bite to eat. Their large patio, complete with string lights and all the ambiance you could ask for, features outdoor of seating for you to enjoy their tasty creations.

Their menu features a wide variety of authentic Mexican cuisine. From Taco de Trompo to flautas, there is something you are sure to love. The dedication Nona’s has shown to bringing something new and exciting to our community makes for one wonderful addition to the food truck scene we now have here in the Coastal Bend! Corpus Christi chef Sam Silva is now the owner of El Jefe’s, having joined the food truck community in the fall of 2017. While El Jefe’s may be considered a newcomer to the scene, they have certainly gained popularity with the community quickly.

With its signature dish being called the “Corpito Fries,” you know El Jefe’s knows what locals want. The dish consists of fries smothered in chile con queso, pico, creamy chipotle, avocado lime sour cream, queso fresco, and your choice of meat. Is your mouth watering yet? Although the mobile truck is the self-proclaimed “Jefe” of Mexican street eats, according to local Corpus Christians, between the Corpito Fries and the delicious street-style tacos, El Jefe has earned its name. The City of Corpus Christi has grown by leaps and bounds from the original “ice cream trucks only” ordinance we once had. Now, the city – and more specifically, the Marina Arts District – are making an effort to provide an all-inclusive experience for the community by maintaining a balance between existing brick and mortar businesses and mobile food trucks. This gives all business owners a chance to play in the same market space successfully, and even provide opportunities for one another. Lesley and Ben Lomax, owners of Bar Under the Sun, are on the cutting edge in terms of their support of food trucks because they are the only brick and mortar in town that has electrical hookups and facilities for trucks. That means no loud generators are needed, and there is a consistent place for food trucks to park in the Marina Arts District.

“Consistency and dependability are really important for the mobile food industry to blossom in Corpus Christi,” explains Barrera. “The Downtown Management District is excited to help food trucks that already have success grow into brick and mortar establishments, and we have programs in place to help.”