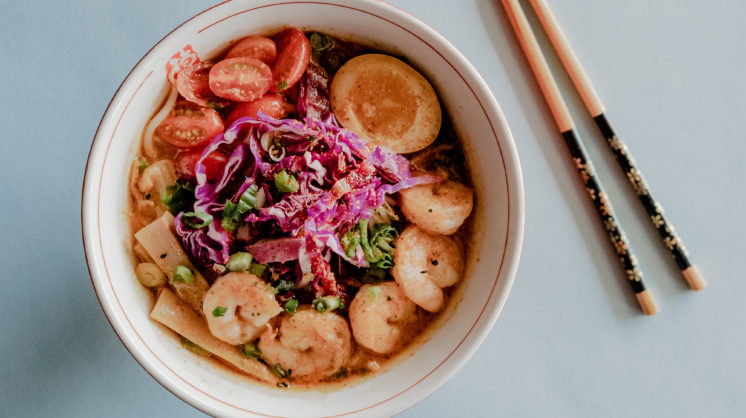 A vast number of dishes come served in a bowl – grain bowls, smoothie bowls, burrito bowls … you name it. In fact, bowls rival plates nowadays as the vessel of choice for serving fresh combinations of flavors and ingredients. Representing a variety of food types and cultures from poke and ramen to chili and pasta, what follows is a deep dive into some of the Coastal Bend’s tastiest bowls. Spoons at the ready, folks.

The Fusing of Cultures

Ramen is ubiquitous. It exists in many forms—and as the Japanese dish continues to gain popularity, it is increasingly a vehicle for cultural influence.

It’s a dish in which tradition and respect for the preparation amplify the product and yield some deliciously unique flavors. At Ramen Legend, the staff’s traditional method of making ramen intensifies the flavors in the dish, and every component plays a crucial role. “You have to think about every ingredient; how they’ll interact with one another in the bowl,” said chef and co-owner Carl Bernardo. “It’s like chemistry. Every spoonful is packed with flavor because everything intentionally adds up.” 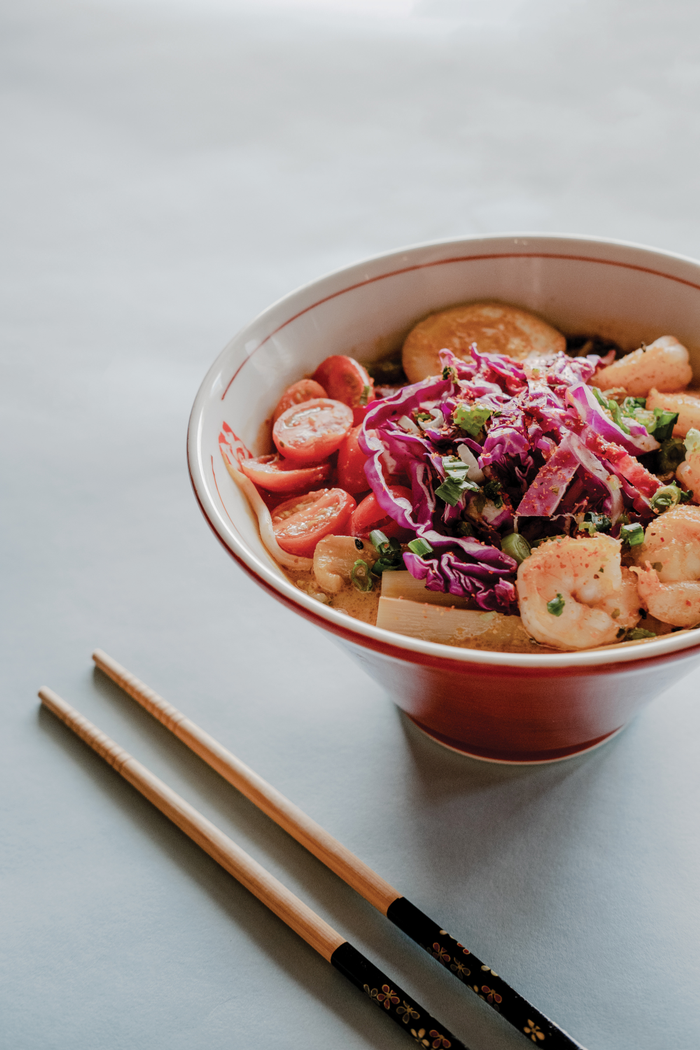 For Bernardo, introducing his customers to new ramen concepts provides him a chance to push the envelope. By fusing together the tradition and origins of ramen with more modern ideas and flavors, Bernardo is able to create an innovative eating experience you won’t find elsewhere. Take his Tom-Yum Ramen dish, for example. This isn’t something you’d typically see on a ramen menu, as it infuses Thai flavors into the Japanese dish. “It’s really a fusion experiment,” he said. Which is exactly what Ramen Legend is all about–bringing bold and innovative creations to the menu without being afraid to break the status quo. “People will say what we do isn’t real ramen, but I am interested in poking the bubble,” Bernardo said. “That’s how food evolves these days. Always pay respect to where a dish comes from, but don’t be afraid to get creative and show people new things.”

Located in Port Aransas, Castaways Seafood & Grill has an item on the menu that never fails to sell out on a daily basis. We chatted with manager Emily Hernandez to find out exactly what it takes to create its famous Seafood Gumbo: 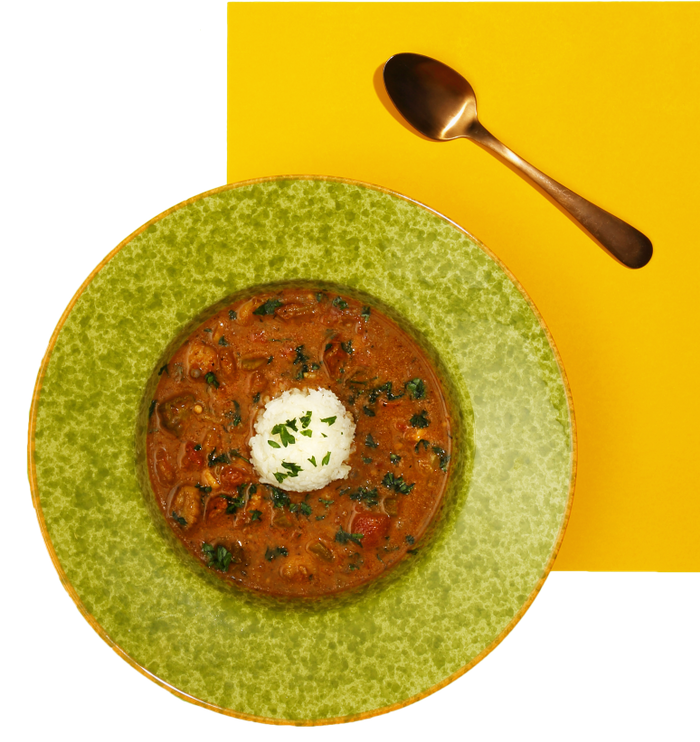 The Anatomy of a Poke Bowl

The Water Street Sushi Room’s Tuna Caliente poke bowl is a favorite for many locals, but did you know the famous dish of raw, diced fish and veggies served with rice originated in Hawaii? Poke, which translates to “cut crosswise into pieces,” is believed to have been first prepared by island natives centuries before Westerners arrived, and didn’t become popularized in the States until the early ’90s, thanks to Hawaii legend Chef Sam Choy and his poke contests.

The Water Street Sushi Room serves up some of the best poke in town, and we’re breaking down the anatomy of one of its most popular bowls: 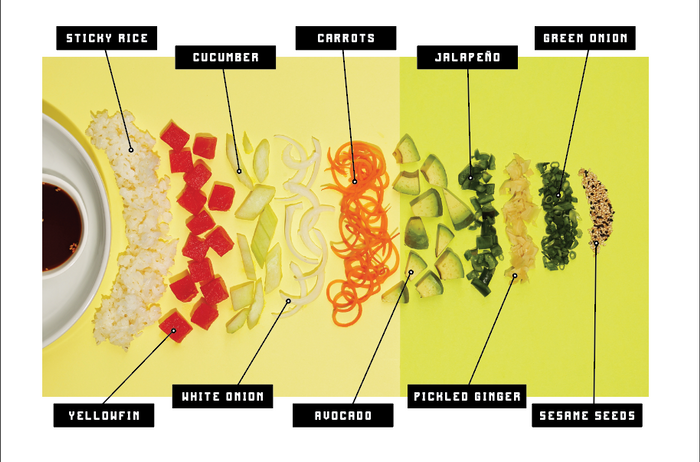 Are You Hot or Cold?

When it comes to ordering or preparing your own pasta, Luciano’s Italian Restaurant owner Joseph Douglas says it’s all about the temperature outside.

For the warmer months:

Opt for a vibrant and bright dish, such as the Pasta Angela. With colors reminiscent of blooming springtime flowers, this dish blends slowly simmered fresh garlic, dried grapes, onions, prosciutto, tomatoes and pine nuts deglazed with white wine and mixed with linguine in a butter cream sauce. 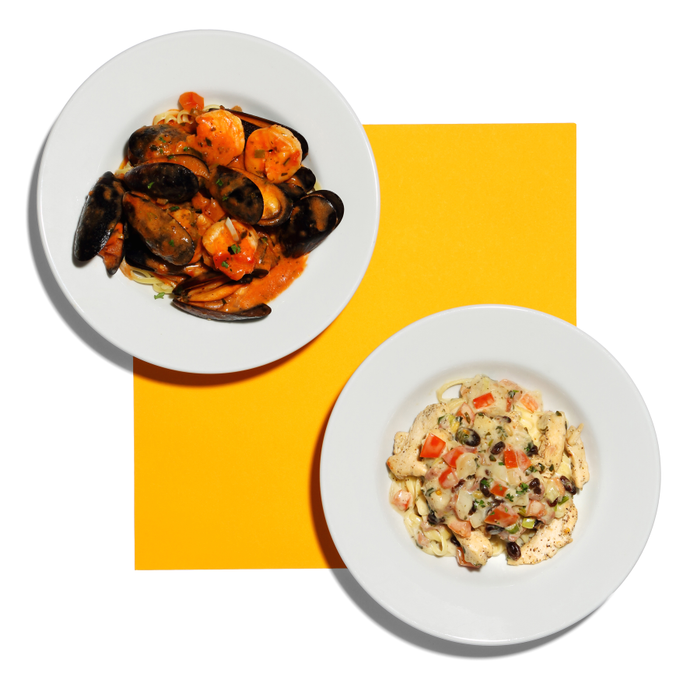 For the colder months:

Opt for a warm and robust comfort dish, like the Black Mussels Adriatico. Sauteed in olive oil with fresh garlic, basil, tomatoes and diced shrimp, the mussels are finished off with homemade tomato sauce and served on a bed of linguine. This hearty entrée is fulfilling and guaranteed to put some warmth in your day.

When most people think about chili in Corpus Christi, they think about Hamlin Pharmacy and Jesse Lerma. In late July 2020, the greatest short order cook there ever was passed away. Lerma spent just over 60 years working for the local joint and over the years, the “Jesse’s World Famous Chili” became synonymous with the word Hamlin. He was the first to arrive each morning, with a smile on his face, ready to serve the masses. Today, Lerma’s original, coveted recipe is still used, and while you can add it to a burger or fries, we’ll always opt for the proper serving of the dish: in a coffee mug with a saucer, topped with onions and cheese. 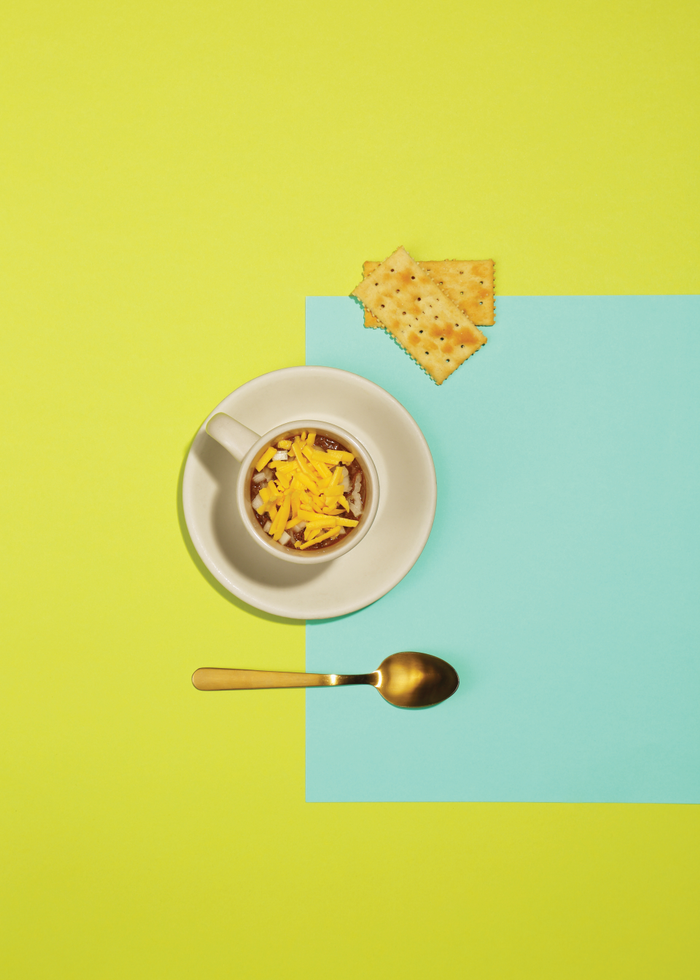 You’ve landed on chili as your meal of choice, but now the question asks itself: what’s the best food item to pair? First, figure out how you’re wanting to use your side, i.e. to scoop, dip or have as a base. Here are a few ideas to get you started.

It’s All In The Broth

“A good bowl of pho will always make me happy,” said the late Anthony Bourdain. Though a noodle dish, it is also a soup, and therefore like a clean slab of marble for a metaphorical Michelangelo to cultivate a symphony of flavors centering around the broth. Pho can be created with a myriad of ingredients to personalize the dish, but the broth is crucial. If the elements were planets in our solar system, the broth is the sun. 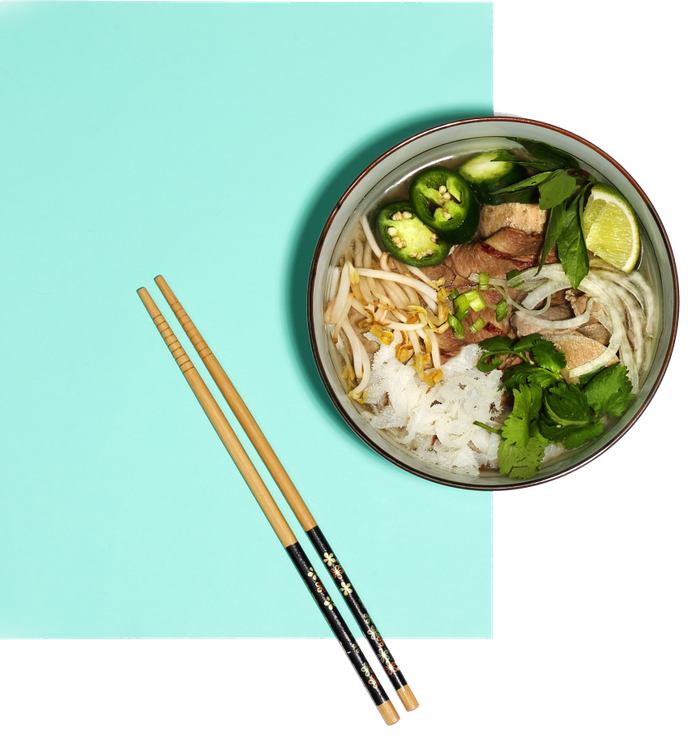 Simmering for hours, traditional pho is made and served with beef. The noodle soup is an amalgamation of Southeast Asian cuisine: An orchestra of aromatics, sauces, toppings and herbs come together with tender rice noodles in a pool of simmering clear broth. Hoisin sauce, sriracha and lime juice are additional accouterments that will only elevate the bowl further.

With a goal of paying tribute to all the Vietnamese mothers, grandmothers and aunties affectionately crowned the best cook in the neighborhood, Pho Tastic & Deli is a local restaurant where the service and environment—and most importantly, the pho—are unrivaled. Pho Tastic provides several variations of traditional and authentic pho offerings, with one of our favorites being the Pho Combo, which as described by owners Mimi and Huy Nugen, is very customizable. However, the broth is our star here, and Pho Tastic’s is a labor of love. With a simmer time of 18 whole hours, grilled onions and ginger are added at the start of the process, and in the last two hours, five different seeds are incorporated to enhance the aromatics and flavor, resulting in the perfect broth.

An Even Better Broth

Preparing a good broth comes from the components you simmer. Below are a few ideas to help get you started if you want to make pho at home.

The History of Curry

Though the name is singular, there are a variety of dishes called “Thai curry.” Neighboring countries, each filled with an abundance of flavor and spices, developed varieties of the dish rooted in tradition. It’s commonly agreed upon that the dish was first made by Indians, with recently discovered evidence of the cuisine dating back to around 2500 B.C. The word “curry” is actually an Anglicized form of the Tamil word “kari,” which translates to a spiced dish of sauteed vegetables and meats.

As settlers and traders voyaged to India from around the world, recipes for the dish began to travel throughout Southeast Asia, including Thailand. Curry is a popular dish in Thai cuisine due to its harmonious combination of sweet, salty, spicy and savory. Up until 1939, Thailand (then known as Siam) was the only Southeast Asian country not colonized by the West, and although it had been influenced by its neighbors, Thailand maintained its own special cuisine. In the 16th and 17th centuries, Thailand was ideally placed within trading routes to benefit from the introduction of ingredients that would later further develop the cuisine. Regional influences affect the herbs, ingredients and spices used to cook each interpretation of curry. As Indian cooking techniques dispersed across Southeast Asia, key components were shared to create the popular kaeng phat, commonly known as Thai Red Curry. 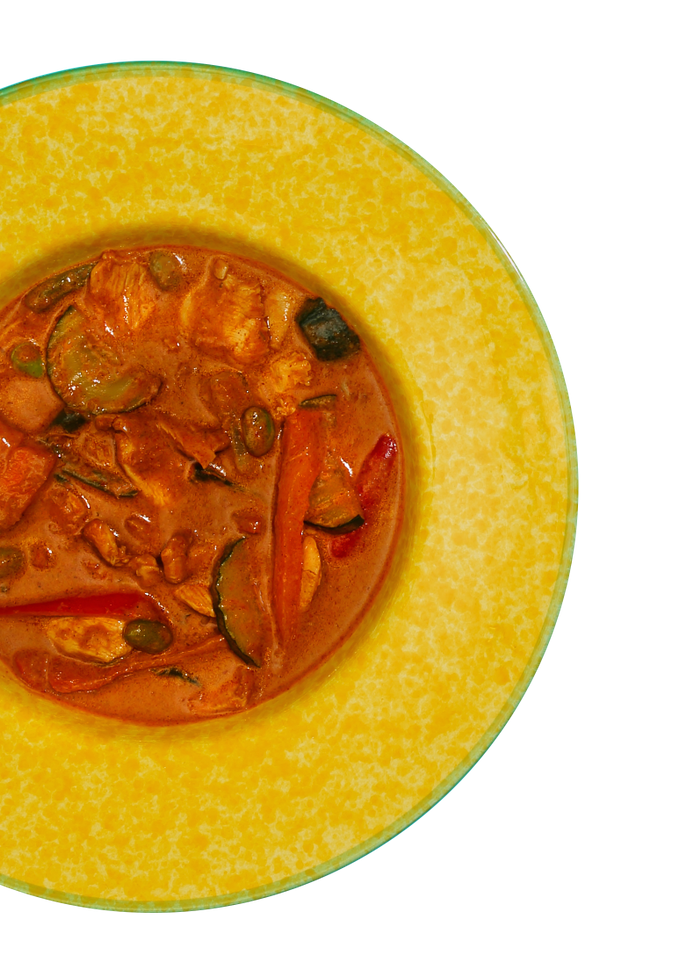 Thai Red Curry is a staple along with green, yellow, Massaman and Panang, each with subtle variations. The influence and spread of the delicious dish can be attributed to cultural exchange. However, one must underscore America’s involvement in the Cold War, as Americans would return from Thailand and attempt to recreate the cuisine. During the 1950s and ’60s, Thai food made a more pronounced introduction into American cuisine through immigration to California, and the opening of the Bangkok Market in 1971 further contributed to the popularization of Thai curries in the U.S., as it was the first market to import Thai ingredients.

More Soup For You

What soup should you get?

The Coastal Bend is filled with restaurants serving up a variety of delicious soups. With so many great options, it can be hard to decide which route to take. So, with a few local favorites in mind, here’s a handy decision-making tool to help. 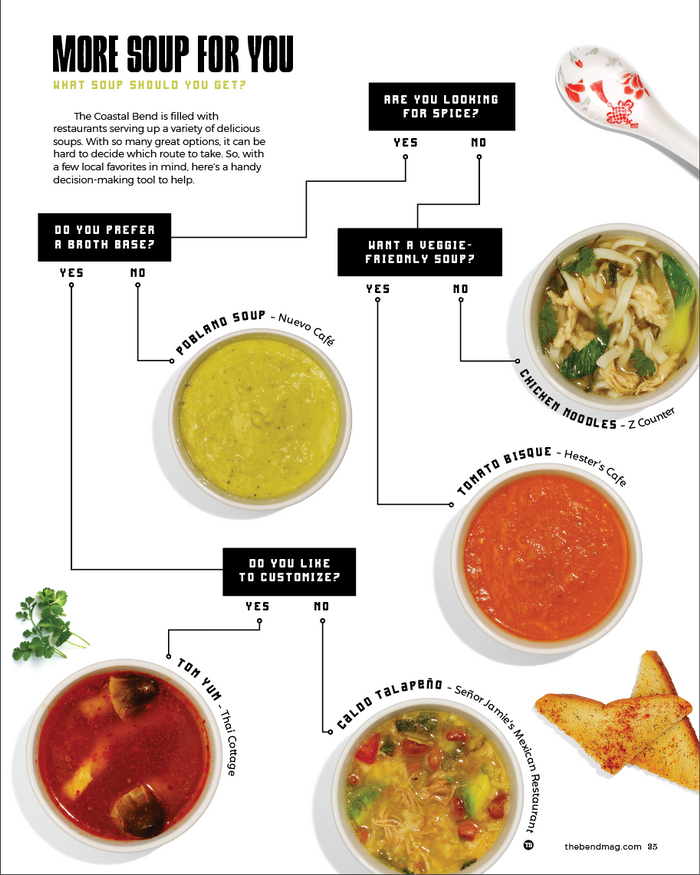