Running More than Just a Tab - The Bend Magazine 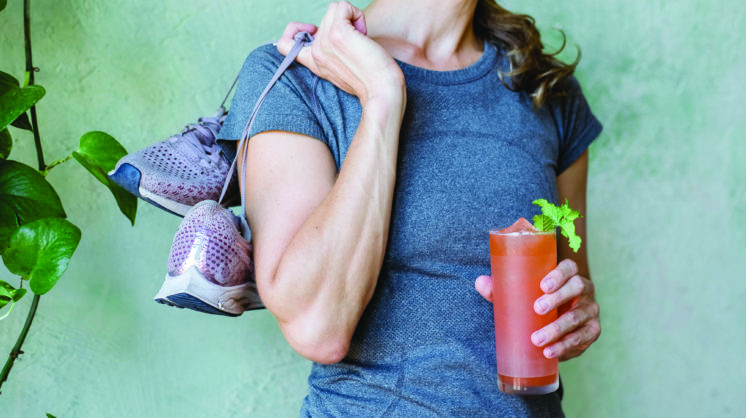 Picture this: a striking view of downtown, a cool refreshing cocktail, and a three-mile run with your community neighbors. That is exactly what’s in store for those who have joined The Gold Fish’s Running Club. As more people begin to move downtown and adopt it as their own neighborhood, the ability to partake in healthier activities is really what has motivated the running club to exist in the first place.

“We just wanted to do something healthier,” Jessica Gignac, Co-Owner of The Gold Fish, says with a laugh. As she is saying it out loud she realizes how funny it sounds – pairing alcohol and running. However, those two elements seem to actually pair quite nicely. Bars around the country have tagged along on this new trend of running clubs emerging from their saloons.

Another leading factor in the origin of the running club was The Gold Fish’s mission to bring more people downtown. While one of the main reasons residents head downtown is to drink, she wanted to figure out a way to incorporate other activities the community can partake in when going out. “We really like our place here to be an active part of the downtown community,” Gignac says. “And, starting a club like this allows us to do that and bring a real communal feel to it and then maybe even bring people downtown that wouldn’t necessarily come down here.”

When joining the club, (and by joining, that means adding yourself to the Facebook group and showing up to the bar) you can expect a fun-filled evening. Every Tuesday night, club members meet at The Gold Fish and the run begins at 6 PM sharp. The route mapped out is three-miles and takes runners all the way down to the Art Museum of South Texas, through Uptown, and then back through the Mariana Arts District where they finish back at the bar.

Not the all-star runner type? No worries. They have paces for any and all runners who are looking to be a part of the club! “Sometimes if we are feeling lazy we will do a two-and-a-half mile run,” Gignac says jokingly. The group is a non-competitive running club – everyone comes and has a good time without the pressure of racing one another or making a certain time on your mile.

Once the hard part is over, the fun begins! Because after all, who doesn’t love an ice-cold beer after a good run? The group gathers back at the bar and enjoys drinks with one another. While it’s a way for friends to catch up and enjoy each other’s company, it is better than just meeting at the bar to get drinks, because of all the calories you just burned! Gignac humors the fact that every now and then, if you get there a little early, a drink or two might end up being consumed before the run commences.

As for the future of the club, Gignac hopes to really just build a stronger group. “I have been in running clubs all my life and you know, you run together for a couple years and you really start to know each other and form this community,” she says. “I think that is just a really cool thing and I hope to bring that to this club.”