Rebel Without a Closet - The Bend Magazine 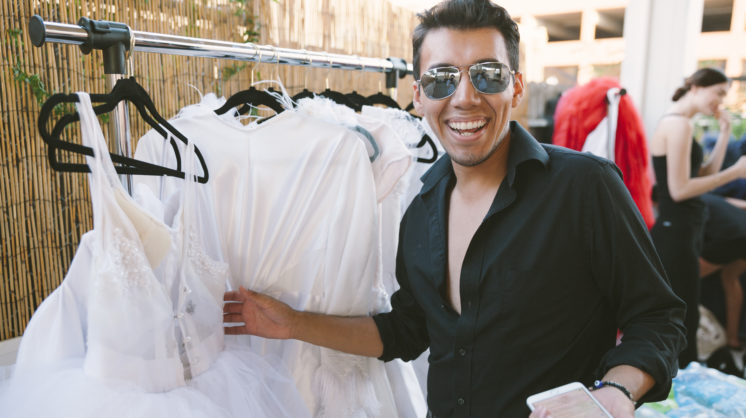 Nick Perez has a tattoo on his forearm. It says one word, “unapologetic,” and it’s showcased when he rolls up the sleeves of his white button-up, a simple shirt adorned by baby-pink pants. The tattoo is as much of an announcement to others as it is a reminder to himself of his mission.

Perez is a young fashion designer from Aransas Pass, Texas, who has experienced profound success in a short time. He began designing clothes when he was 16, for FCCLA competitions in high school. He initially thought he would grow to be a band director, but once he fell in love with designing, he would stay after school in the sewing room while his parents thought he was at band practice. His first fashion show happened before he’d even graduated from Aransas Pass High School in 2016. Since then, Perez has showcased at South Texas Fashion Week, where he presented a collection inspired by Beyonce’s Lemonade, and Austin Fashion Week, where he was the first designer to showcase from Corpus Christi. As evidenced by the Lemonade-inspired collection, pop culture and current events consistently influence Perez’s designs. His transition to the brand name Nicó was culturally influenced — a nod to his Latino heritage. When faced with news detailing violence against queer lives, he sought to showcase those current events in a different way, by creating his Through the Looking Glass collection. Although fashion is sometimes perceived as a functional art, it is affected by the same external influences that painters and musicians and poets draw from.

Perez describes his early designs as edgy, but screaming for attention in a way that he doesn’t want to scream, now. That’s not true to his purpose as a gown designer. Although formal wear and gowns are inherently attention-getting, the gowns are equally about the woman wearing them.

“Putting [the models] out of their comfort zone makes them more comfortable, in a way,” he said. He strives to give confidence in the form of clothing. This prerogative led to his more current designs, which are intended to demand attention, but no longer scream for it.

His designs aren’t only for women — his formal wear belongs on any body that chooses to wear it. But, the fact that his designs cater to both women and people who are actively denying to conform through clothed expression makes this sentiment more powerful. Clothing is a form of speech, and people who feel that their speech is quelled may desire for their adornments to speak for them — but not in a way that is too loud. For example, women are often looked down upon for having to raise their voices to be heard. Being able to attract positive attention in a space without yelling for it is, in some ways, dream-worthy. Helping give people voices is a theme in Perez’s work that extends beyond his designs. He’s been working with children in the area as often as possible, both to support their organizations financially and to give kids in the Coastal Bend an unconventional role model. Perez wants to show kids that it is possible to be an artist, and do work one loves. It is possible to bring life into a space, and introduce something new. His most recent show, which took place at Bar Under the Sun on July 27th, was the first couture show in Corpus Christi — and proceeds from the show benefited CASA of the Coastal Bend. His September show will benefit the Ready or Not Foundation, and plans for a winter show are also underway. It’s undeniable that Nick Perez will continue to be unapologetic in testing the boundaries of the spaces around him.