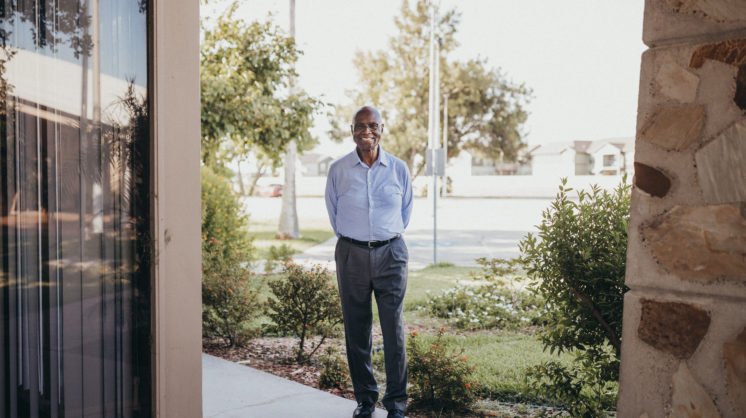 We sat down with the beloved Pastor Don of Corpus Christi Christian Fellowship to have a candid conversation on his journey to founding a church that now represents 38 different nations, how the recent deaths of George Floyd, Breonna Taylor, Tony McDade, Ahmaud Arbery, and too many other Black lives around the nation are not isolated events, but more so have catalyzed a tipping point, and why complacency is an existential threat.

We should all be asking ourselves “Is it more important to defend people who have lost their lives or is it more important to somehow shed light and deal with people who destroy property?” I think the evil those men displayed is what we should be discussing, because it precipitated the looting, it precipitated the protesting, it precipitated the recent deaths of innocent Black people. I think it is shameful when the destruction of property gets more attention than the destruction of human life. In my view, no rational human being supports violence in any form, but if one talks about the looters first, it is a sign of where that person’s heart is. And as a Pastor, I want to know where people’s hearts are.

George Floyd, Breonna Taylor, Ahmaud Arbery, and Tony McDade’s deaths are only four of the most recent examples of the racial injustice Black people in America face every day. I’d love for you to expand on the idea that these aren’t isolated events, but more of a tipping point, perhaps.
It is my view that the arrogance Derek Chauvin showed when he murdered George Floyd really got shoved into the gut of most of us. It isn’t just Black people saying enough is enough, it is multiracial. And that is what we have needed, we needed a concerted effort. I think there are a lot of people, in politics and not, that want division in the country and they’re doing a pretty good job at it. But, I think the amount of people who are speaking to this now is the difference. I don’t want this world for my grandchildren and my children, and I pray for that. I believe God has mobilized those who have a conscience, sound reasoning, and compassion for others around the country and that is what we are seeing. It is not just a Black movement anymore, it is an American movement to seek real change.
What role do you feel the church can play in the fight for equality?
The church is the light of the world, that is what Jesus calls us, and I think the church has been woeful in this. I think church leaders need to make a full denunciation of racism and police brutality, but they’ve yet to do that. I think if they don’t give a denunciation of what is going on, they’ll be left out. I think unlike our predecessors in Christianity, we now have access to press in a way we’ve never had before, and some even have access to lawmakers and congressmen and senators and you can use that.

Those that have access, in my opinion, should use that access for righteousness, rather than for their own personal benefit, and too many evangelicals are currying favor to power rather than speaking to it. I think the church has failed miserably because you have these large churches with big names and followings, and if these guys would do their jobs, it would mean so much. They have access and you can make an immediate impact and make a great difference in advancing the call for justice and righteousness. God’s throne is built on righteousness and justice and scriptures tell us that when the righteous rule, the people will rejoice. So, we need good leaders in that aspect and not to fan the flame of racism and injustices.

What do you think of complacency in a time like this?
I think complacency in this hour is a crime against humanity. Complacency is complicity with those who pose an existential threat. We can’t say this conduct is not an existential threat to Black people because they are senselessly dying at a much higher rate and they are innocent. To be complacent is to be complicit.
Is there a message you want to relay to anyone reading this and willing to learn?
To the Christian community, I want to say that you must find in Jesus Christ the strength in all that is needed, the strength to do it, the wisdom to do it, the understanding to do what is necessary. Because Jesus Christ came into a hostile environment and the system that was, was an existential threat to him, from his birth. So, I identify with Jesus in that. So, I would say we cannot sit on the pews and say amen because somebody told us about a story from 3,000 years ago, but won’t say amen to justice and righteousness and equality in our present day.
Outside of that, I think together we stand and divided we will fall. I would say do not stand with a lie, because the truth will always win out and that we must have dialogue. Do not be insensitive to pain, because the pain of another could one day be yours. I would also suggest to read Dr. Martin Luther King Jr’s Letter from Birmingham Jail and that might help your perspective. Always ask questions, teach your children to be fair-minded, and let your voice be heard. And, if your ladder is leaning against the wrong wall, this is a good time to change walls.
Contact:
6602 S. Staples St | 361.993.2223
cccfellowship.com
Share