Playing in the Streets - The Bend Magazine 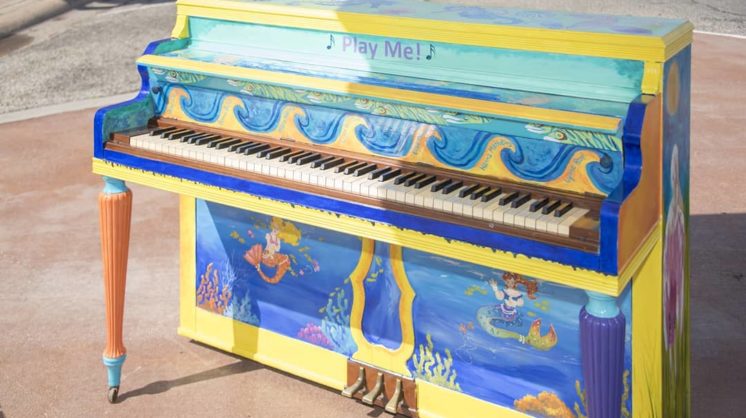 I had never quite experienced the communal piano until college. In every common room, where students often choose to congregate or wait for others to congregate with elsewhere, one or two black Steinways sat idly by — never put on display, but never forgotten for long enough to begin collecting dust. The pianos served no purpose, by strict interpretation. They were merely stationed in the college’s communal spaces as offerings to students and passersby. I initially thought they would be cast aside, relegated to the back corners of minds focused on classes and extracurriculars and errands and such, but the pianos were played constantly. Many evenings during dinner, music of various genres would trail into the dining hall from the adjacent common room, and remind the hordes of hungry twenty-somethings of things that are beautiful.

Communal pianos don’t only sit inside of rooms, but outdoors, in other kinds of community spaces — parks, streets, squares, etc. Since the early 2000s in England, “street pianos” have been positioned in major cities all over the world. Last weekend, the Coastal Bend established its first street piano, in the city of Rockport’s Heritage District. The communal piano was largely a community effort to create. A small group of local artists — including Mike Catlin, Lynne Ruf, Bonnie Bullis, Elisa Mathews, Hanna Mathews, Milana Klanica, and Cisco Willison — collaborated to hand-paint the piano’s exterior with sea creatures and beach scenes. According to the Rockport Pilot, Sandy Repka of Refugio donated the piano, and many other community members assisted in the transportation and artistic direction of the project. The piano was unveiled on Saturday, June 9, as a “Second Saturday” event. “Second Saturday” events are intended to encourage Rockport residents to spend time downtown, engage with local artisans, and support local businesses. The event on June 9 was deemed “Tune into Downtown Rockport,” and focused on the street piano kickoff.

Play Me, I’m Yours, an organization that sets up street pianos in cities around the world and donates those pianos to local schools and charities, states in their mission that street pianos “are designed to provoke people into engaging, activating, and claiming ownership of their urban landscape.” The pianos offer an outlet of expression that can pass from pairs of hands, and give residents a feeling of presence in their city life.

This ability to feel present in one’s city couldn’t be important for Rockport residents, who have been investing effort and time in Rockport’s recovery following Hurricane Harvey — a natural disaster that hit almost one year ago. Being able to devote energy to artistic endeavors and prioritize community bonding shows growth and stability, but more importantly, giving residents an outlet to create art for those around them, and actively participate in the quality of their environment, may give Rockport residents a symbolic ownership of their landscape that may have felt lost following the hurricane. If nothing else, the piano can still remind those walking down the streets of Rockport of things that are beautiful — particularly, music trailing through the streets.