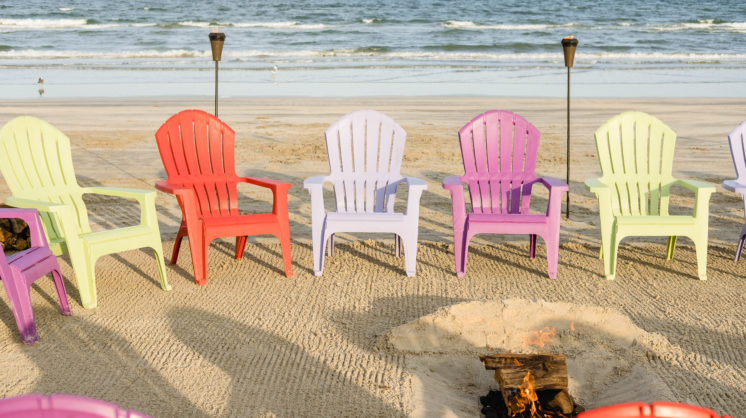 Shawn and Kassie have been building their relationship and their business since the summer of 2016, when the idea of the Rollin’ Tide Boil Company was put into action. Balancing the dynamics of a romantic and business partnership pushes them forward and makes the creativity flow easier. “Technically, we do have a unique relationship,” Shawn laughed.

Shawn discovered everything he loved about Alabama shrimp boils could be done on the beach. Big pieces of South Texas shrimp fit in well with a smoky driftwood bonfire and sandy toes. And for an extra tropical feel, Shawn and Kassie are well versed in cooking up snow crabs.

When they threw their first family shrimp boil bonfire, they noticed nobody looked at their cell phones for hours. Shawn and Kassie knew they had created something pretty special. This was in the summer of 2016 when the business first launched.

After five months of rolling ideas around and rounding them out to add more to the bonfire experience, Shawn and Kassie began offering a shrimp boil complete with Tiki torches, hula entertainment, and signature Key lime s’mores.

Word of mouth spread, and by 2017, Shawn and Kassie had to focus solely on the business, making it their full-time job.  Kassie even became CEO of the company.

However, when Harvey hit in August 2017, Shawn and Kassie were left wondering, “What can we do now?” “Our motto became, ‘We roll our pot to your spot.’ After Harvey, we literally had to make that applicable,” said Shawn.

As South Texas recovered from the storm, Shawn and Kassie built bonfires for people in Austin, Houston, and surrounding areas in Texas.

“No matter where we are, our guests are just like family. We get to know them during our events,” Shawn said. “It’s a cool dynamic that a lot of restaurants don’t have.”

When guests arrive to the beach location, the food is already piping hot and on the table. But if it’s too hot to eat, taking a swim in the ocean before dinnertime is always an option.

Shawn and Kassie bring the party to preferred beach locations and accept bookings on their Facebook page or via email.