One Day at a Time - The Bend Magazine 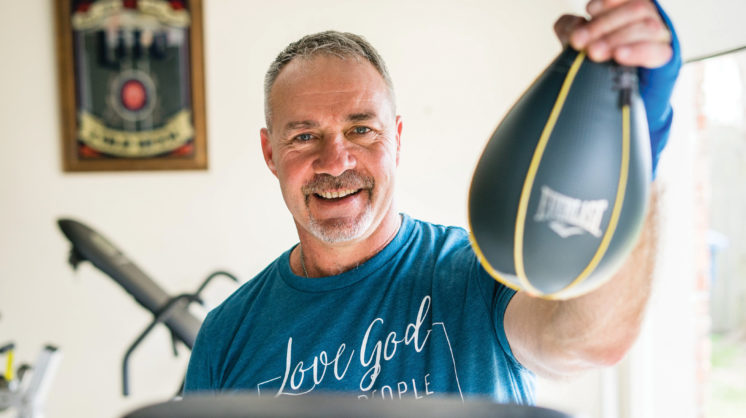 It wasn’t until his eighth day in the hospital that Paul Romans, 51, could finally move his thumb. His wife captured that first glimmer of hope on video.

Romans’ health crisis began on a February night in 2017. He awoke to find himself numb on the right side. His wife called an ambulance to take him to the hospital. Doctors determined that a stroke had caused his paralysis. Romans never expected to have a stroke. He lost his full-time job as an oil field manager in August 2016. Along with his job, he lost his health insurance. He was working as a consultant and studying to get his master’s degree in business when the unthinkable happened.

“I was on my last class, managerial economics, and I had two weeks to go (when) I had the stroke,” he explains. He spent more than a week in the hospital, but near the end of his stay, that slight movement in his thumb provided much needed encouragement.
“From that point on, it was like I’m going to get back,” Romans recalls. “But it’s going to take a lot of failure.” Romans and his wife have seven children. Six of them, spanning from age 10 to 19, were in their Portland house when he had the stroke.
During the weeks that followed, his family took him to countless physical therapy appointments. In the beginning, even talking was difficult. He tried relying on technology, but that didn’t always work.

Two months after the stroke, Romans was able to play golf. “Weak golf,” he jokes.

Fast-forward a year later, and Romans can walk several miles, lift weights, and speak normally. People who don’t know him would never guess he’d had a stroke. Despite his medical hardships, Romans maintains an upbeat attitude and unrelenting gratitude for even the smallest signs of progress. He credits the support of everyone around him for his comeback, especially his physical therapists, family, and friends.
“It’s not every day you have gains,” says Romans. “But it’s the constant attempt at getting better that brings about growth.”

Even though he didn’t have health insurance, the hospitals and physical therapists worked with him, and his church also pitched in to help. In spite of the stroke, Romans still earned his college degree.

“I was limping across the stage, but I got my MBA,” he remembers with a proud smile.

Mere months after graduating in May 2017, he found another full-time job. Throughout the process, he states that he has learned how to be comfortable asking for and accepting help.
Now, Romans has a new mission. “Also give it in return,” this grateful stroke survivor advises.
Share