Not Your Normal Yoga - The Bend Magazine 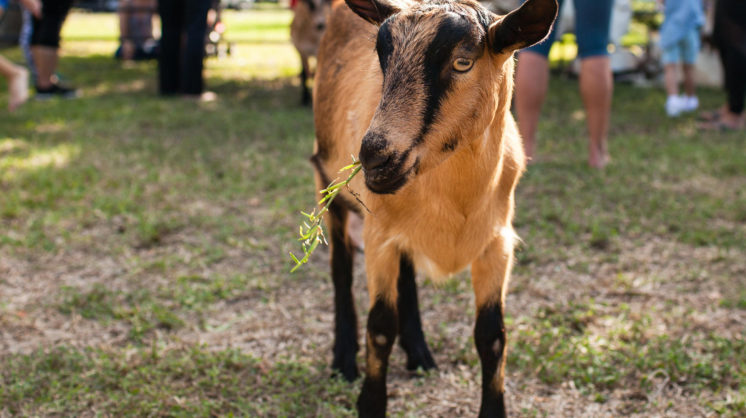 The sounds of laughter fill the air, and a goat starts to nibble on your clothing. This is not your normal yoga class.

‘Goat yoga’ is a phenomenon taking the nation by storm, which mixes traditional yoga practice with the company of free-roaming goats. The alternative yoga class has made it all the way to the Coastal Bend, where one of Corpus Christi’s most established yoginis has offered classes at breweries and festivals. 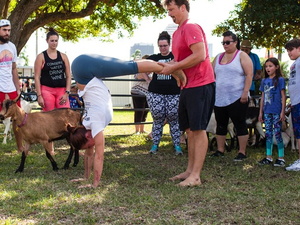 “The first time I saw it, I was like, ‘Well, I know I would love to do it,’” said Lindy Burns, who founded Youga Yoga in Corpus Christi. Goat yoga emerged a little over a year ago in Oregon and has since captured hearts and minds across the nation. Classes can now be found in locations ranging from the Denver International Airport to more expected venues, such as farms in New Hampshire and California.

Yogis and yoginis who teach classes boast about the benefits—namely, a major attitude adjustment—that comes with exercising in the presence of playful, barnyard animals.
“Maybe you’re not interested in yoga and wellness, but you’re in it for the fun element,” said Burns.

When Burns first heard people were combining the furry creatures with yoga practices, she knew she had to try it. Burns, who’s been teaching yoga here in Corpus Christi for nearly 15 years, grew up around goats. Her grandparents were goat farmers, and she recalls helping birth babies and bottle feeding them as they grew up. When she found out about goat yoga, she was most surprised that other people would want to do it, too. 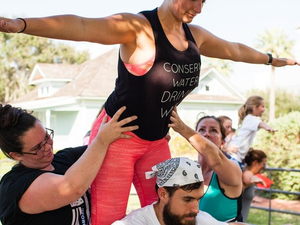 Sure enough, the classes held in the Coastal Bend have been a huge success—the first class was capped at around 40 people with others on a waitlist. Burns partners with Thompson Dairy Farm, which has hauled about 20 goats to locations ranging from the Corpus Christi Food & Wine Festival to Lorelei Brewing Company.

“The goats come up and actually start nibbling on their clothes,” said Burns. “There’s a lot of laughter.”
Burns is gearing up to host more classes in February 2018 when Thompson Dairy Farm will be welcoming a new herd of baby goats, Burns said. She hopes to continue the goat yoga classes, and potentially expand to yoga with horses.

As a yoga teacher, Burns’ main goal is to boost her students’ mental health through a physical yoga practice. Burns, who also works as a psychologist and professor at Texas A&M University-Corpus Christi, said she sees goat yoga and other alternative classes as a way to attract all walks of the community to a healthy activity.

“My goal is to enrich the community,” said Burns, and there is no doubt goat yoga is doing just that.
Share