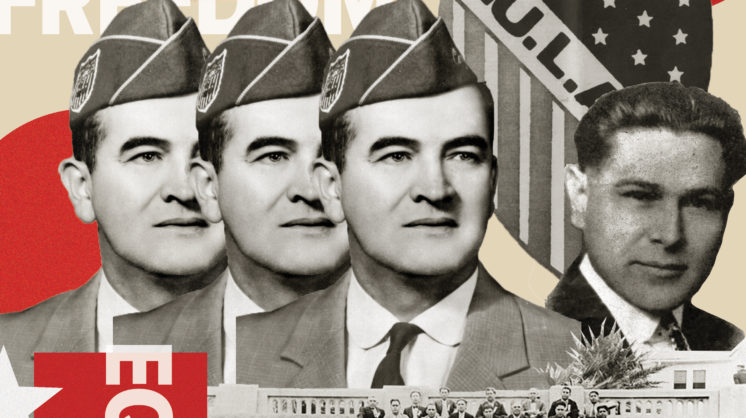 Decades of history rife with immense struggle can be found in the lead up to the creation of what is now one of the nation’s oldest and largest Hispanic civil rights organizations. In an effort to celebrate the League of United Latin American Citizens’ 90 years of service, we must first look back at how, and perhaps more importantly why, the organization was founded in the first place.

Concluding the Mexican War, the United States annexed a third of Mexico’s territory, inheriting nearly 77,000 Mexicans as U.S. citizens. For generations, Mexican-American citizens were targets of prejudice, resulting in overt acts of discrimination and segregation, including infamous signs reading “No Mexicans Allowed” posted on all fronts.

Mexican-Americans were dis-enfranchised and unable to vote, and many could not pay voting taxes. Professional jobs were frequently denied because most Anglo-Americans perceived Hispanics as lazy, poorly dressed, dirty, ill-educated, and likely to be criminals. Mexican-American children often didn’t go to school, as they spent most of their time helping their family earn wages for food and shelter. Children fortunate enough to attend school had to go to segregated schools known as “Mexican schools,” which were institutions in deplorable conditions.

Specifically, in Texas, discrimination reached extreme levels that brought together Mexican-Americans to create organizations to defend themselves. Among them were three leading organizations: the Knights of America, the Corpus Christi Council of the Sons of America, and the Latin American Citizens League.

A local businessman and leader of the Corpus Christi Council of the Sons of America, Ben Garza, brought a group of educated Latinos together and formed a council in Corpus Christi under one title, objective, and constitution – United Latin American Citizens, later changed to the League of United Latin American Citizens. In 1929, the first-ever uniting convention took place at the Obreros Hall in Corpus Christi. The motto “All for One and One for All,” proposed by J.T. Canales, became the basis for future LULAC pursuits. Today, the organization stands as the oldest and largest active Latinx political association in the United States, with more than 135,000 members in 37 states (including Puerto Rico), and four active councils in Corpus Christi.

Former Corpus Christi LULAC Council #1 Historian Dr. Cynthia E. Orozco is the daughter of Mexican immigrants, a historian, writer, filmmaker, museum consultant, and a two-time Ford Fellow. Dr. Orozco’s extensive and impressive  knowledge of Latin-American and Hispanic women’s activism enabled her to co-edit Mexican Americans in Texas History and Latinas in the United States: An Historical Encyclopedia. As a research associate at the Texas State Historical Association (TSHA), Dr. Orozco published 80 articles on Texas history for the Handbook of Texas, a digital state encyclopedia developed by the TSHA.

One of her published entries shares the vibrant history and context behind the League of United Latin American Citizens.

LULAC was “organized in response to political disfranchisement, racial segregation, and racial discrimination. It responded to bossism, the lack of political representation, the lack of a sizable independent Mexican-American vote, jury exclusion of Mexican-Americans, and White primaries in such places as Dimmit County,” Dr. Orozco wrote.

“It also dealt with the segregation of public schools, housing, and public accommodations. It attempted to solve the problems of poverty among Mexican-Americans and sought to build a substantial Mexican-American middle class. It has persisted, despite occasional acts of intimidation from law authorities.”

For nearly 100 years, LULAC has been credited with the formation of critical advocacy efforts, including a veterans’ committee to address Hispanic G.I.s’ rights, which later became the American G.I. Forum organized by LULAC member Hector P. García. The Ford Foundation grant established the Mexican American Legal Defense and Educational Fund, the most significant employment agency for Hispanics in the United States. LULAC’s efforts also focused heavily on school desegregation efforts and education in general, awarding its first scholarship in the 1930s. By the ’70s, LULAC National Education Service Centers and the national scholarship fund were established.

In the Handbook of Texas, Dr. Orozco continues, “In the 1940s, LULAC member Edmundo E. Mireles promoted the Spanish language teaching in Texas schools, and worked with the Federal Employment Practices Commission to open up jobs for Mexican-Americans in the defense industry. LULAC members were also involved in Hernández v. State of Texas, which gave Mexican-Americans the right to serve on juries. LULAC supported the Texas farmworkers’ march in 1966 and endorsed the Equal Rights Amendment in 1974.”

LULAC’s civic ideology encompasses liberalism, individualism, support of free-market capitalism, anticommunism, and United States patriotism. Its success and longevity are partially due to its programs that focus on helping children, the impoverished, and the elderly. Though LULAC originated as a refuge for Latinx communities, it is established to help all communities suffering from injustice nationwide. Today, the growth of diversity from age and communities to races and gender empowers LULAC to continue supporting as many groups and individuals as possible.

LULAC Council #1, the Founding Council whose origins are rooted in Corpus Christi, has proudly made strides over the past decades on the idea of helping those in need, working to advance the economic condition, educational attainment, political influence, housing, health, and civil rights of the Hispanic population. Made up entirely of volunteers, Council #1 is community-oriented, advocating for those in need. Surrounding it are LULAC Council #4869, 4-Star Council, the Tejano Council, and LULAC Para Todos LGBTQ.

President of LULAC Para Todos LGBTQ Eric Holguin says, “As years have passed since the initial formation of LULAC, we’ve seen the foundation and what it strives for – equality and equity for all –  we have seen the definition of that evolve.

“Back then, there were no LGBTQ organizations,” Holguin continues. “In Nueces County, the stances LULAC has taken have evolved with the times, ensuring that we are not leaving any disenfranchised community behind. Whether it’s LGBTQ or Black Lives Matter or the healthcare workers on the front lines of COVID-19, our mission has evolved to be a voice for those who feel like they don’t have a voice. That has always been the goal for LULAC,” he says kindly. “But, now it’s not just focused on the [Latinx] community but the disenfranchised community as a whole. As a historically underserved community, we, the [Latinx] community, believe it is our duty to be allies to other disenfranchised communities. We want to use our voice and power we’ve accrued to help and uplift other voices that need that.

“Over the past couple of years at the local level,” Holguin continues,” our organization has held political leaders and faith leaders accountable for using disparaging language. While we understand the stances we take are not always going to be the most [mainstream], there’s this idea in South Texas that we can’t rattle cages, and we always go with what they say. [This] organization has explicitly gone against the grain on that. If you’re in a public position and not acting in the best interest of all constituents, we are going to be there to let you know it’s not okay to be disparaging to communities.”

As LULAC celebrates 90 years of work, we remember the decades since the founding of our country, and all the Hispanic Americans who have added to the backbone of the United States. What began here in Corpus Christi as a force for developing social and educational programs for Hispanic Americans has evolved to lead the nation in bettering opportunities and ensuring equity for the Hispanic American community and disenfranchised communities as a whole. From elderly assistance, adult education, and prisoner rehabilitation to equal employment programs, scholarships, youth organizations, and many more, LULAC members, local and nationwide, continue the legacy of the courageous early pioneers who risked it all for the generations that would follow to form what has become LULAC today.