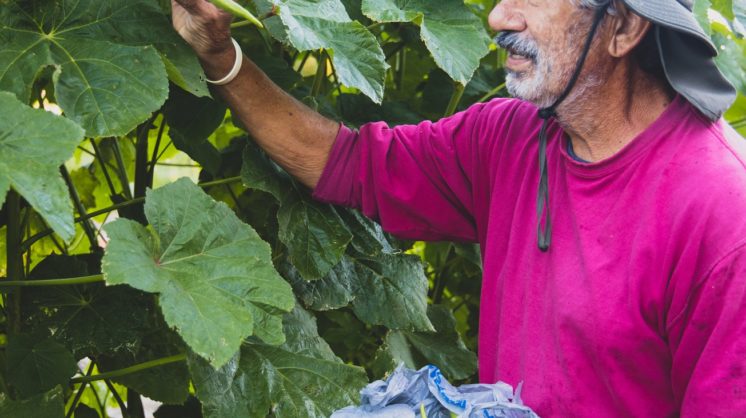 Jamie Bustos was planting spinach when he answered the telephone. From the other end, I asked if it was an okay time to chat, concerned about disrupting his planting process. “I am just planting spinach,” he said. “I can talk, too.” As the founder and owner of Terra Madre Mini Farm, Bustos is living proof that for small business owners, the work never stops. It is his passion for cultivating produce and sharing what he grows with the community that makes it a labor of love.

As you’d expect from the “mini,” Terra Madre is not a full-fledged farm. Instead, it is a large-scale garden where Bustos tends and develops the earth. Stemming from his personal ideology pushing back on fast food culture and taking the time to slow down and enjoy what we eat, Bustos was drawn to a certain “soul food movement” that started in Italy some years ago. The movement mirrored his mantra of eating slower, eating healthier, and choosing foods that are good for the body. This new way of approaching wellness proved not only to better the health of individuals, but its larger effect wound up being the benefits for Terra Madre, Italian for “mother earth.” Bustos was immediately drawn to the movement and the phrase, which ultimately became the name of his business and the driving force behind his way of life. The land is a rented space that he sought out after he outgrew his backyard garden. “I wanted to expand and start selling at the local farmers’ markets,” explains Bustos. “As I began connecting with the farmers’ markets, the idea of gardening as a business started to change.” This opened up opportunities for him to grow more and sell more, and also created the space for Bustos to share his devotion and philosophy on healthy eating with others.

Being a small-scale farmer off and on for over 14 years, Bustos has been on the front lines of advocacy for a shift in how people approach food and how certain foods not only affect one’s body, but also the planet. “We get a lot of criticism about the food culture we have,” Bustos says regarding the perception of South Texas. “We have problems with learning how to scale down [portion size] and change the types of food that make it on the plate.” But the consumption habits of our local residents make up just one side of the issue. Bustos explains that while he used to spend a lot of energy encouraging others to consider a plant-based diet (or just to increase the amount of fresh produce as a starting point), his focus has shifted to agricultural practices and how they affect existing cultivation practices – and in turn, what that means for the planet in future generations. “It has become the impact of the agricultural practices as we know them that are a bigger deal even than our individual health.”
Bustos went on to explain how lasting positive change starts with local farmers and their commitment to sustainable farming practices. At the same time, he has noticed that people do in fact seem to grasp the issue of bad eating culture and how diet can either tremendously help or hurt certain health conditions.
That sense of concern has sparked attendance at local farmers’ markets. Even if the general public doesn’t feel as deeply connected to healthy eating as he does, Bustos says the demand for fresh, local produce is gaining traction, and that alone indicates that the needle is moving. “Your health is your wealth and your wealth is the health of the planet,” Bustos asserts, a mantra of his for many years. If you look at health as currency – with healthy consumption choices adding to the planet’s bank and bad health habits subtracting from it – each of us holds the opportunity to contribute to the betterment of Terra Madre or mother earth.

Looking forward, Bustos is looking forward to participating in a new delivery service from local growers. “Everything we do is an evolving thing,” he says, and for now, catch Bustos and the Terra Madre Mini Farm crew on Wednesdays at the Grow Local Farmers’ Market downtown.
Contact:
Terra Madre Mini Farm on Facebook
Booths at Downtown (every Wednesday) & Southside Farmers Market (every Saturday)
Share