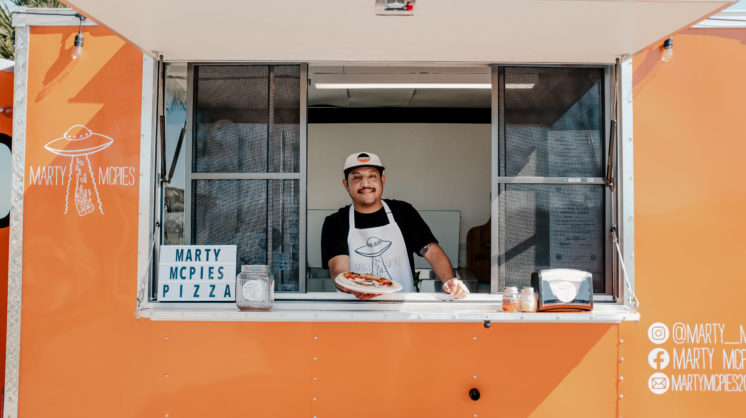 When we think of Corpus Christi, we picture the sandy shore that always attracts tourists, or the vast amounts of Hispanic culture, but it’s never long before we happily remember its endless selection of food trucks making downtown and local popups more delicious. One vendor in particular has managed to take a traditional dish and make it all his own: Martin Flores of Marty McPies, who specializes in custom-made pan pizzas. When starting his food truck, Flores was able to find motivation and momentum pretty quickly with the help he received from Del Mar College’s career advisors. “I had Del Mar business advisors help me through the legal aspect of opening my food truck. In fact, they still keep in touch with me,” he says.

Flores not only had the motivation to start his business, but also the passion and creativity to keep it moving toward the future. His truck’s fast-growing Instagram page is about to hit 1,000 followers, and Flores also does his own advertising and outreach.

“I’ve just been doing everything myself lately. Word of mouth has played a huge role in growing my social media account. I’ve had plenty of friends come through my Instagram or Facebook and tag me in posts,” Flores says.

By building awareness of his pies and showing just how much the public loves his food, Flores aims to make his truck as big as it can possibly be. “Foodies are big here in Corpus, so if they see a good-looking pizza from someone who has a large following, then it gets around. I’ve only been in business since January of this year, so it’s starting to get around,” Flores said of his plans to grow public awareness of Marty McPies.

Like most Texans, Flores was caught in the freezing storm that took Texas by surprise this February. While his food truck was still operational, he did experience some minor inconveniences because of the storm.

“The temperature outside definitely affects the dough, so if it’s too cold, then my dough won’t rise and I can’t stretch them out,” Flores says.

When creating his pizzas, Flores tries to incorporate a diverse suite of flavors so he can leave a lasting impression on his customers.

“I just want their taste buds to go for a little ride. Maybe the sauce just hits you and gives you that sweet little tang with a hint of spice,” Flores says. Taste and technique are core components of his craft, and skills he is constantly trying to improve on when creating new menu items. “Although the pizza is thin, they still get that fluffiness when it comes to the crust. So it’s two different textures and a couple of flavors, which gives an all-around treat to the customer.” He has also expressed a desire to collaborate with other local businesses and grow the food scene as a whole. Even though he’s baking his dream one pie at a time, he still wants others in the industry to reach their potential, as well.

“Just go for it! It’s actually easier than I thought it was going to be. There’s always gonna be a review here and there that puts you down, but if you have a passion for it, you’ll be able to taste it, and you’ll want everyone to try it,” Flores says.

Whether you’re cruising downtown or just happen to have a strong craving for pizza, Marty McPies is your most delicious bet.