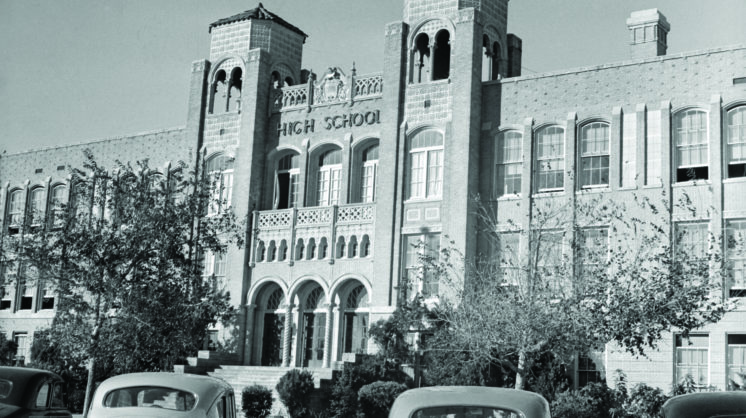 By: Jillian Becquet  Photo: Contributed by the John Fred’k ‘Doc’ McGregor Collection at the Corpus Christi Museum of Science and History

Going back to class this August means walking through history for the students of Roy Miller High School, Corpus Christi’s oldest high school. Originally named Corpus Christi High School, the institution first opened its doors in 1894. The district constructed the current building in 1929 after the total number of local public school students grew to 5000. In 1950, the city renamed the school to honor former Corpus Christi Mayor Henry Pomeroy (Roy) Miller.

Roy Miller was elected as Corpus Christi’s mayor when he was 29, just over a decade older than Miller High School seniors. He served from 1913 to 1919 and made major strides in modernizing infrastructure during his tenure, including paving roads, building sewers and a water system, and staffing a full-time fire department. After an unsuccessful bid for reelection, he continued to serve the city by heading up the 1919 Hurricane relief committee and lobbying in Austin and Washington in support of the Port of Corpus Christi.

Before your favorite student walks into school for the year, take a moment to share a little bit about the person for whom the school is named. For many of Corpus Christi’s older schools, those people are the great educators and servant leaders of the past, including Mary Carroll, Ella Barnes, Moses Menger, Rose Shaw, Foy Moody, and Roy Miller.