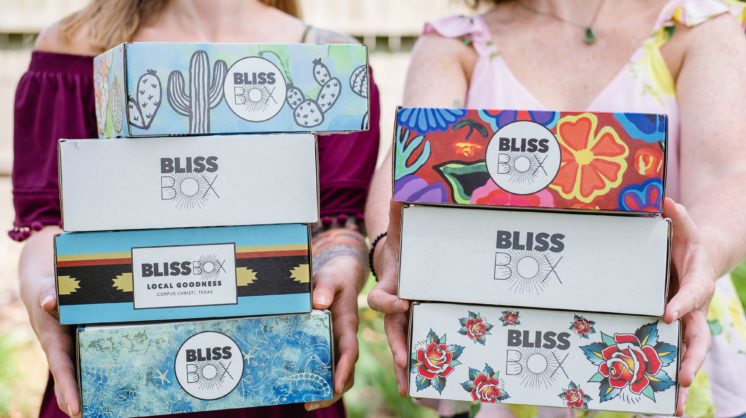 The Corpus Christi Bliss Box was born from a dilemma. Sara Dolson and her sister, Christine Powell, preferred to shop locally, but too often overflowing schedules interfered with attending market days or taking the time to check out independent businesses.

Dolson says, “I wanted to support local, but sometimes it’s kind of hard. Like when you’re trying to be fast-paced, you just want to go to Starbucks.”

Dolson described it as a “light bulb moment” when she came up with the idea of bringing local products straight to residents’ doorsteps. What better way to endorse shopping locally than the CC Bliss Box, a subscription-based assortment of Corpus Christi’s original products? Starting up involved a hefty commitment from both sisters who were already overwhelmed with school and work obligations. They scouted out vendors and artists, distributed flyers, and talked to people in the marketplace. The sisters soon went from being too busy for each other to being way too busy together.

Sara and Christine had plenty of enthusiastic vendors on board, but they wondered if people would actually buy the box. Their website launched on November 23, 2017, which turned out to be an unforgettable Thanksgiving Day. Every time a new subscriber signed up, Sara’s phone would ping with a notification.

The sisters were pleasantly surprised when the number of subscribers reached well over 80. That was much more than expected. Then, the real fun began.

The sisters planned the boxes, contacted vendors, estimated how many items were needed, and quoted a price. With plenty of forethought and a hint of spontaneity, themes were chosen for the rest of the year. Next, it was time to pick out items that matched the theme. To preserve the element of surprise, Dolson and Powell decided not to reveal the boxes’ contents before they were sent out. That way, customers could be delighted with something new that they might not have thought of trying before.

Each month a Bliss Box subscriber receives a gorgeous, theme-based assortment of different products, all sourced here in the Coastal Bend. Local artists design the theme-coordinated cover art for each month’s box. For every box that goes out, a dollar is donated to a local charity. Occasionally, the cover artist has decided the monthly charity choices, which are based on the sisters’ passions.

Both sisters are grounded in the values that influence where and how they shop, and this is reflected in the contents of each monthly box. The sisters have followed a vegan lifestyle for over ten years, which is why food products in the boxes will always be vegan. Mindful of ecological issues, the sisters are searching for a local source of packing material which Powell calls “the fluff.” “Yeah, we even try to get 100% recycled fluff,” says Dolson. Every month, the sisters sit in the “Bliss Box room” at Dolson’s house to build the boxes, neatly arrange the products inside, and make sure every box is identical. Since both sisters juggle other responsibilities, they fit the whole packing process into one night. The next morning, Dolson ships the boxes, while recalling all the “Bliss Box drama” she and her sister joked about the night before.

The abundance of local products, food, and talent in Corpus Christi has boomed significantly. Like our culture, the sisters’ business continues to grow. Both of these enterprising young women strongly believe that sourcing locally is not only good for our planet but also for our neighborhoods. Each dollar spent at a Coastal Bend business helps independent, entrepreneurial merchants thrive.

You can subscribe to receive a Bliss Box for as little as 25 dollars a month. Go to ccblissbox.com to choose a plan.