Local Theatre Productions in the Coastal Bend this Holiday Season

Curious about what’s in store at your local theatre this season? Harbor Playhouse is running its 13th production of A Christmas Carol, fans of the classic A Christmas Story can catch it over at Aurora Arts Theatre and the enchanting tale of It’s a Wonderful Life will hit the stage at Port Aransas Community Theatre. We sat down with the directors of each production to get the inside scoop on what you can expect.

JC: What can audiences expect to see in this year’s production?

JM: We are creating, as we call it, theatre of the mind. It’s not your typical stage show. Think of it more like a radio show of old: A cast of nine, taking on the challenge of nearly 50 roles, using only their voices and the collective imagination of our audience. We’ll have live musical accompaniment, plus a mix of prerecorded and live sound effects created before your very eyes (and ears) – from footsteps to a cash register to a body falling in a faint. This show creates a whole new feel and, we hope, a new appreciation for audio dramas.

JC: What are you most excited for regarding this year’s rendition?

JM: A lost scene, cut from the shooting script, has been added to our show, and it answers a few questions regarding one of the main characters. It’s large shoes to fill as Pete Lutz truly did the groundwork for this show. He put together the script, sound effects and so much more. Having been a part of the cast for the past four years, I am excited to take on the role of director, bringing the show to the Port Aransas Community Theater for a second year. It’s a Wonderful Life is a true classic that has been a traditional staple of my family’s holiday celebration, and I am very honored to help make it a tradition for the Coastal Bend.

JC: What can audiences expect out of this year’s production?

DA: You’re going to see a lot of happy, excited characters singing and dancing and enjoying the holiday season. Our lead is just so much fun to watch on stage. He truly makes you feel like he really wants this present, and he isn’t going to get it. We’ve also got a younger group of kids [on stage] this year and they are so talented. They all learned to tap dance for this one song we’re doing. And of course, you know, kids being kids, they know every line of every person in the entire show. My favorite part of the show is when they’re up on Santa’s lap. We’ve got a funny Santa Claus this year and lots of elves that will make you laugh. There was a lot of talent that auditioned, and I was very fortunate.

JC: What is something unique about Aurora’s rendition of this production?

DA: This is not a show that fits for a stage the size of the Aurora Arts Theater, so it will take a little imagination. It’s going to be very creative in how we present it because it’s very difficult [for us to create] a house, exterior settings and a school all [on our stage].

JC: What are you most excited about for this year’s production?

MS: This is my directorial debut, but I’ve been in A Christmas Carol [at Harbor Playhouse] the past eight years. Each year, every cast member has those “I wish we could do this, and I wish we could do that” moments. I finally get to have those moments for me! This year, my challenge has been to bring audiences what they know and add some new life to it to make it a little bit different from what we’ve seen in the past. It has been fun putting in those differences while still staying within the bounds of copyright.

JC: What role does the cast play in giving the annual production new life?

MS: Everybody on stage is local talent, meaning we don’t get paid for this. We do it because we love it. The great thing about the show is that we’ve had people who have done it yearly. One of the things we considered when casting the show this year was making sure we [put people in roles they haven’t played before.] So, it’s giving new people opportunities to bring their touch to these characters while still being part of a show they know and love.

Next up? Check out Coastal Bend Shopping Made Easy by Local Makers. 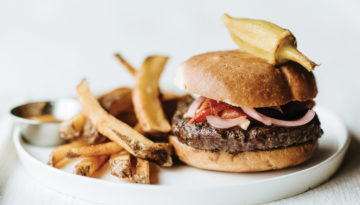