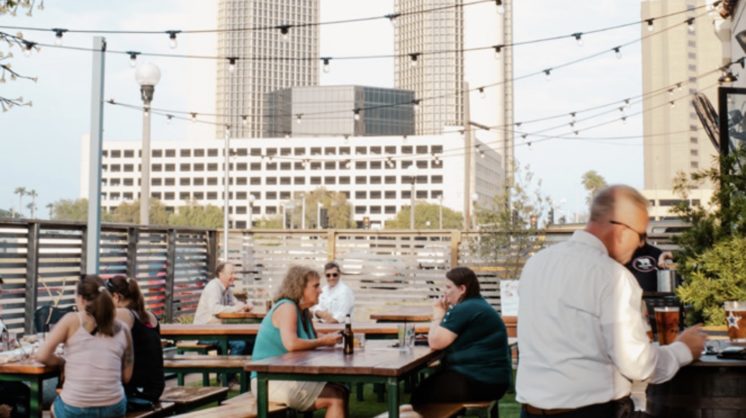 Once an old service station and then a dry cleaning business, the humble corner bar on Taylor and Mesquite Street has lived a few lives. In late 2017, the building was restored and turned into what is now known as The Gold Fish. After a two-year run, Michael Treiber and Houston Boswell purchased the bar, and its next chapter was set to unfold in March of 2020 with expanded outdoor seating, an additional

bar and a whole new cocktail menu. However, March of 2020 had other plans.

“We were very eager and excited to open and see our vision finally come to life,” Boswell said. “As news of the pandemic’s scope and its effect on other communities began to spread, a sense of apprehension began to creep in, but we remained hopeful.” 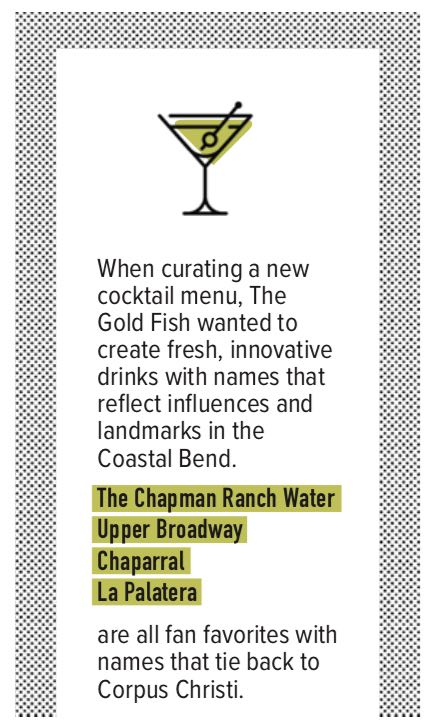 As one can imagine, opening a bar alongside a pandemic that temporarily shut down the entire industry would be no easy feat. The Gold Fish had already become a popular local spot, and the community anxiously awaited its return. “[We] definitely had our challenges, and it was stressful at times,” Boswell said. “I think we were able to overcome many of these obstacles by being flexible and keeping an open mind, which allowed us to adapt during a rapidly changing situation.”

After several hard months, a pivot was necessary for the bar to remain open, and after receiving a Food and Beverage license allowing it to serve food and operate at a limited capacity, The Gold Fish was able to truly open its doors
in the summer of 2020. The pandemic would continue to throw the service industry curveballs, and while operations continued, the ebb and flow of high case numbers left patrons to choose their public outings carefully.

With the timing of the ownership change and the reopening of the bar right before COVID hit, the success The Gold Fish is seeing today is a testament to what a staple it has become in the local community.

“I think our success can be attributed to our relaxed outdoor atmosphere and the great service we provide. We have an amazing staff that has many local ties within the community,” Boswell said.

It’s a wonderful thing to see people rally behind a local business. The Gold Fish might have “returned” at the start of 2020, but now in the summer of 2022, it seems as though there isn’t a night that goes by where it isn’t filled. Whether you walk by the corner bar on a Tuesday or Saturday night, the chances of seeing a familiar face enjoying a cocktail on the patio are high, and after the last two years, that’s something we’ll certainly raise a glass and say “Cheers” to.