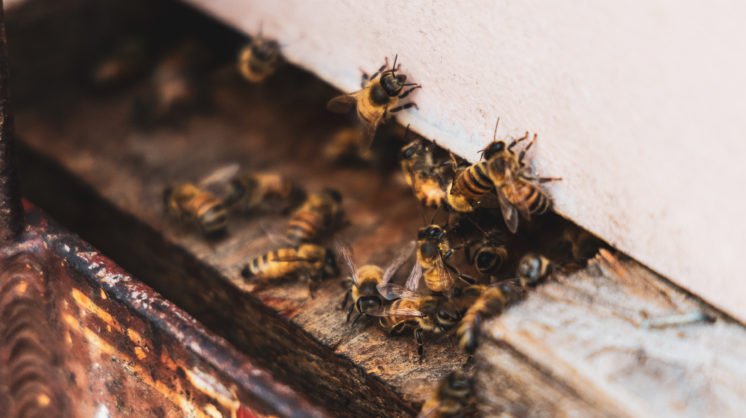 A sweet treat and a unique service are under one roof at South Texas Apiaries. This dynamic local business is the brainchild of Michael Leidner, who initially started beekeeping as a hobby. The pastime officially became a full-time career in 2016.

“I’ve always been interested in bees. I got my own almost 10 years ago, in 2011,” Leidner says, reflecting that it gradually began to grow as he sold honey and bee removals. Leidner, who lives in Orange Grove, says  his apiary has expanded from approximately 10 to 100 hives over the last five years. It has thrived under his watchful eye and attentive care. “It’s like any livestock that must be cared for, with food, medication, monitoring,” he says. “You can start with a small colony – a queen, workers, brood, larva, baby bees – and after about a year you can grow that into something large enough to produce honey.”

Honey has many health benefits. It’s rich in antioxidants, was linked to heart health benefits in multiple studies, and has been shown to help lower triglycerides, blood pressure, and “bad” LDL cholesterol. Not to mention the fantastic taste. Patrons of South Texas Apiaries often say once they’ve tried it, they cannot stand store-bought. There’s a reason for that.

“A lot of honey sold in grocery stores is produced out of the country, and we don’t always know all of what is in it. It could be flavored rice syrup,” Leidner says.

Hearing the nature behind honey production might make you question any store-bought bottles you’ve ever consumed. “With commercial packers, their goal is a consistent product. Every time you buy a bottle, it tastes exactly the same as the last one. With a local producer, every single bottle could taste different,” Leidner explains. “Because I have bees in Orange Grove, I may have bees in Calallen, Aransas Pass, Flour Bluff – and each one of those locations will produce a different flavor of honey, because those bees are going to different flowers.” The color of the honey could range from dark amber to nearly crystal clear. Much like the color and taste, the uses for honey from South Texas Apiaries also run a full gamut.

“People put it on their face, in their hair, there’s tons of people who claim that it helps their allergies, and then there’s the use of honey as a sugar substitute in everything – coffee, tea, pancakes, waffles.”

As a sugar substitute, honey offers an ideal way to cut out artificial sweeteners and replace them with something natural that helps raise “good” HDL cholesterol in your body at the same time. Honey was also shown in some studies to promote heart health, because it increases blood flow while reducing clot formations, thanks to the phenols and other antioxidant compounds found in honey.

The other side of South Texas Apiaries relates to bees’ health, because Leidner performs human bee removal and relocations. “Bees are great, unless they’re somewhere they’re not supposed to be,” he says. “I physically remove the comb itself – I cut it out, and the bees are vacuumed into a wire cage that keeps them alive and safe, so I can relocate them into one of my bee hives.”

Through this process, he has been able to rescue countless bees, who went on to happily produce delicious honey that our community craves.

While the COVID pandemic affected Leidner’s ability to sell at in-person events and farmer’s markets, he still takes orders directly, producing custom-sized amounts that range from a single jar to a 5-gallon bucket.

Supporting South Texas Apiaries not only boosts a local business and a critical part of our environment, it also feeds your body with a food packed with health benefits. From tasty honey to humane bee removal, South Texas Apiaries’s number is one to save in your phone.

•  Over the course of its life, a honeybee will produce about 1/12 of a teaspoon of honey.

•  Honey takes on the flavor of the nectar from which it was made, which also affects color and consistency.