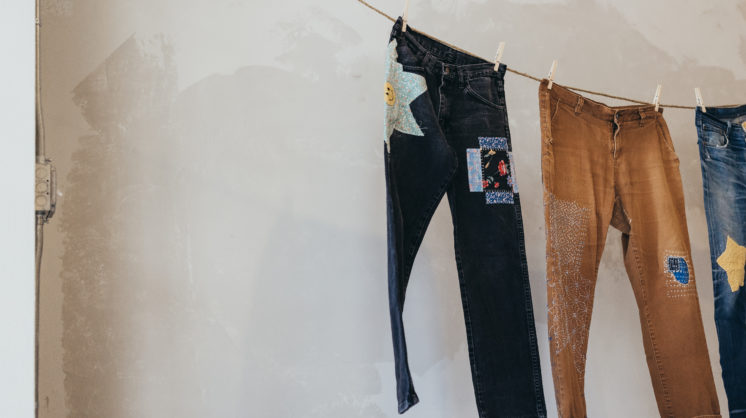 For Benjamin Sorrell, playing a role in shifting people’s relationship to clothes and fashion is at the core of what he does. He hopes to help people learn more about the work we might take for granted that actually goes into making clothes, and to help extend the life cycle of garments.

Sorrell, a multitalented local maker and creative, is primarily a textile artist who has a skillset in other crafts focusing on recycling fabric, mending clothing, and printmaking. In tune with quality over quantity, the work and clothing he makes promote sustainability through reuse and mending. “A large focus for me is mending clothes that people love a lot and want to keep wearing for a long time,” he said. Though his exposure to printmaking at Del Mar College has pushed the young artist to new heights in creative capacity and work, Sorrell also attributes his interests and developed skill to his great-grandmother and grandmother.

A precious memory involves his grandmother’s Singer sewing machine being left behind in Mexico after moving to the United States. She and Sorrell’s grandfather went back decades later to retrieve it. After much time apart, the sewing machine was there under a tree when the couple arrived. It continued to serve Sorrell’s grandmother, with some tending, and illustrates the innate compassion developed to care for cherished belongings, which carries on in Sorrell’s collections.

When discussing his hopes for his work and what he can achieve, Sorrell aims to promote mindfulness and “enough-ness.” Focusing on mending and upcycling, his work includes wearable art, effervescent blankets and quilts, and vibrant fabrics which can act as curtains, room dividers, or anything else the imagination can conjure up.

“I love hearing that my work is part of someone’s daily life in some way … there for the mundane as well as the celebratory,” said Sorrell. As a celebration of the support he’s received, special relationships he’s developed, and time doing garment mending and textile art, the creator is planning a fifth anniversary collection for the summer of 2022. Each piece is unrivaled and unique; Sorrell said he lets the clothing speak for itself as he is guided by the contours of the object he is working with.

How Sorrell speaks about the medium of his work shows a relationship with anything he creates exemplified in his collections. His inspiration comes from an earnest nostalgia for a time in which clothing (and most items) were more cherished and less disposable. Sorrell views his mending work as a continuation of the apparel’s history, and a time capsule of the era from which it came. Garnering momentum and honing his craft, it will not be a surprise if Benjamin Sorrell begins to make history here in the Coastal Bend.