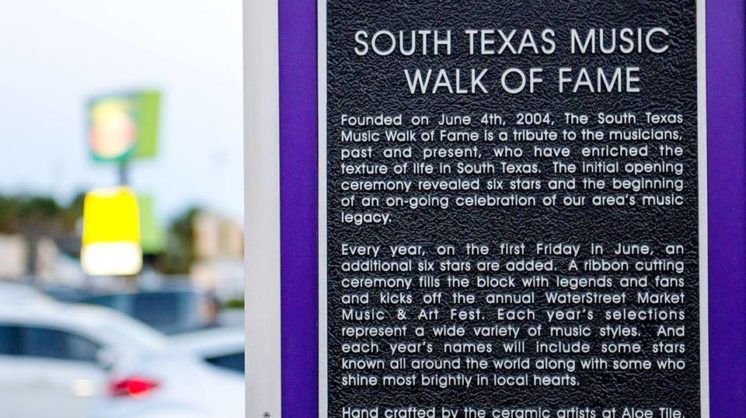 The pebbled walkway surrounding Water Street Market is home to the South Texas Music Walk of Fame – referred to fondly as “The Walk.” It opened in 2004 as a privately funded gift from Water Street Market owner Brad Lomax, to honor the 20th anniversary of the group’s first restaurant opening in Downtown Corpus Christi. The market itself has long since been a place where locals love to gather for fresh seafood, music, and good ol’ coastal hospitality.

To know the market is to know the music scene that defines this part of the bay. And for music makers, being a part of the world of sound that is the Executive Surf Club is a rite of passage. In fulfilling the market’s overall vision, commemorating South Texas’ rich history through constructing The Walk was a fitting sentiment adding to the texture of our city’s musical landscape.
Sue Donahoe is the founder of the South Texas Music Walk of Fame, and worked in conjunction with Lomax to see the project come to fruition. In its 16th year, the Walk is capping its inductees at 100 stars. “Why 100 stars?” asks Donahoe. “We are running out of room! The courtyard is full – so full, in fact, that the stars are competing with tables and palm trees for real estate.” As such, Donahoe feels that the Walk is now “complete” … but that is not to suggest that there are only 100 talented musicians in South Texas worthy of this honor.

“Here are represented musicians, songwriters, producers, and performers of all styles of music, from the early 1900s through today, from San Antonio to the southern tip of Texas,” explains Donahoe. The artists on the Walk represent the core of South Texas’ rich and diverse music scene.

Embodying a wide variety of genres across multiple eras, candidates considered for induction must meet a select standard that exceeds the norm. Being a maker of music is only the tip of the iceberg. Artists considered for induction are required to be documented and vetted as having made a significant contribution to our region’s music legacy – either by their fame and success, bringing the focus of the world onto South Texas, or by contributing so deeply to the region that their local light outshines the awards of others, said Donahoe. Above all, an artist “must be a good citizen.”
While the Walk is already a local landmark, the potential for its impact is truly just beginning. Recognition is especially strong during the annual induction ceremony, which takes place every year on the first Friday in June. This year, seven stars will join the ranks – as opposed to the standard six – to complete the 100. Year-round, the Walk is always open, always free, and led solely by the work of volunteers. It goes without saying that it’s a major attraction for locals and tourists, but even after 17 years, the Walk has not been able to be formally categorized as such.
“Only when we stop adding stars will it be treated as a public attraction, rather than an annual event,” says Donahoe. “Only when it finishes can we begin to look for ways to enhance the Walk as a tourist attraction and educational site. Such possibilities include a walking tour, providing info about each artist, and [the creation of] a book about the stars represented there and about all the nominees, whose names will be honored in those pages, and who, hopefully, will be given a nod by future press.”
Keeping it local (and bayside), each star is handcrafted by the local ceramists at Aloe Tile Works, family-owned and operated in the Coastal Bend for more than 20 years. They are known for their custom designs and master artistry in ceramics, and have a special process for creating their tiles that includes drawing inspiration from the community – things like music, the ocean, history, greenery, people – with the ultimate goal of weaving parts of themselves into each tile, and helping the recipient find themselves in the clay, as well. Aloe Tile Works has partnered with the South Texas Music Hall of Fame from the very beginning, lending their blended approach of classic ceramic style and contemporary design to make the stars feel personal, coastal, and timeless throughout the years.
While each star has a uniform layout so that all look relatively similar, their placement was planned – in the beginning. For the first 10 or 12 years, the Selection Committee deliberately placed stars so that a variety of genre and era was represented from any viewpoint. Recently, stars have had to be placed wherever there was room.
The question of why the stars do not spread farther than Water Street Market comes up quite often. “Although city sidewalks and other courtyards may, someday, be offered, the Selection Committee feels that to extend the Walk physically would be a mistake,” Donahoe explains. The immaculate care given to the Walk by its community volunteers is set at a high standard, and the Committee does not feel that the city should be responsible for following those guidelines. When it becomes an official public attraction, however, that could change.
Similar to nearly all businesses and organizations, Donahoe is having to shift gears in her plans for the final induction ceremony due to restrictions related to COVID-19. Even though the first Friday of June celebration was not possible this year, the Walk’s final bow will take place later this year, when the selection committee “feels it is safe to gather a large crowd that includes as many artists being inducted as possible,” Donahoe notes.
The purpose of the South Texas Music Walk of Fame has always been and continues to be a celebration of the depth and diversity of our region’s music. With the final inductees added among the stars, the mission of the Walk lives on. And for the people who have cared for the Walk for 17 years, the most important thing is for this gift to remain a source of joy for the community. “The Walk has already helped to inspire new and exciting events and organizations that celebrate our region’s art,” says Donahoe. Thus, the closing of this chapter does not signify a true ending. Instead, it is the catalyst in honoring the legacy of South Texas musicians in a profound and indelible way.