In the Heights Opens at Harbor Playhouse - The Bend Magazine 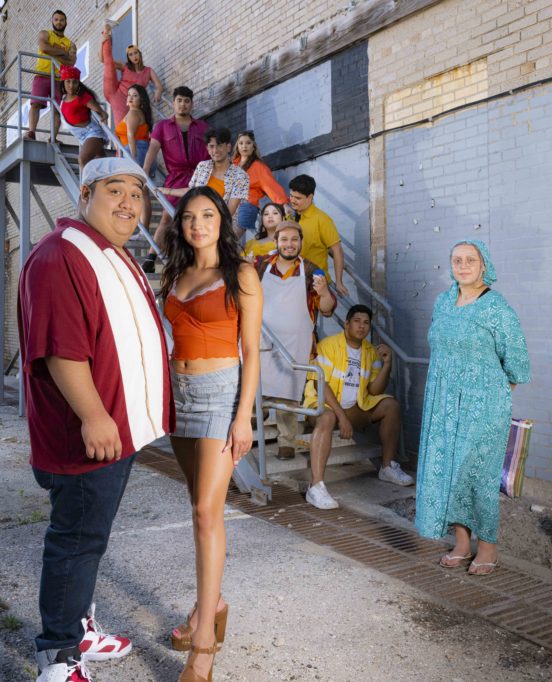 Harbor Playhouse production of "In the Heights." Cast Photo by: Carlos Villarreal

Opening this Friday, June 15, is Harbor Playhouse’s production of In the Heights. The musical tells the story of a vibrant Latinx community in New York’s Washington Heights neighborhood over a three-day time period. The musical’s concept, music and lyrics come from the mind of Lin-Manuel Miranda and a book by Quiara Alegría Hudes.

Harbor Playhouse’s production of the classic is directed by Desiree Phoenix Cantu, with music direction from David Corkill and choreography by Jenny Espino. In anticipation of opening night July 15, we chatted with Cantu to discuss the importance of sharing this story with the Coastal Bend community, production details, stand-out performances and more.

Jessie Chrobocinski: Let’s start with your inspiration for directing Harbor Playhouse’s production of In the Heights. Any specific motivations?

Desiree Phoenix Cantu: The show holds a special place in my heart. It hits home for me because it shines a light on what it is to lift generational curses. This show makes me think of my family. Specifically, my grandmother and mother put so much aside to ensure I could achieve my aspirations, even if that meant them not getting theirs. Having the opportunity to direct this show is my way of saying thank you to them.

JC: What does it mean for you to share this production with the community?

DPC: When the original production made its way to Broadway in 2008, it was the first of its kind. It’s not often you see people of color not only represented but celebrated in such a beautiful way. When I first saw In the Heights, it was the first time I saw a staged show with people who looked like me, with stories similar to my family. Despite the show taking place in New York, I felt like I was experiencing my community.

I hope patrons that see the show feel seen. Sharing this production with the community that raised me has been a labor of love and admiration for those surrounding me. If you come and see this production, please know that we made it, especially for you.

JC: How did working with Music Director David Corkill and Choreographer Jenny Espino play into the production’s overall success?

DPC: Finding a choreographer that could help me achieve this was my biggest goal in the process. I’ve always admired Jenny Espino and the work she produces. Getting her on board to work on this show is what really set everything in motion. Finding a talented music director to tackle a show like In the Heights was another goal of mine. That’s where David Corkill comes in. His attention to detail and flexibility never ceases to amaze me.

JC: What production elements help bring this show to life on stage at Harbor?

DPC: Design aspects have the power to make or break a show. With any production, you want to be sure the design elements are helping to tell the story. Our production of In the Heights takes place in New York City during the summer of 2007, so the costumes seen in the show are very much of the time – Y2K-inspired.

The symbolism of colors is really cool. Almost all of the cast will be seen in shades of red, yellow, pink and orange because [those are the colors] I think of for representing the Latinx culture and the summer-time heat. Abuela, the matriarch, wears green throughout the show to represent the balance and safety she brings to those around her. Nina, who has the biggest character development, starts the show in shades of blue and doesn’t appear in yellow until the finale – which is used to represent feeling detached from her community until she finds her place again.

Thankfully, I have someone as wonderful as Josh Goldson to work with. Our set is insane! It takes up the entire stage and includes the use of perspective, textures and fun little details I encourage the audience to seek out when watching the show.

JC: Are there any stand-out performances audience members should look out for?

DPC: What’s amazing about this show is that everyone is a stand-out performer! Each person is perfectly cast. The lead actors, dancers and ensemble members bring something special to the table. No matter where your eye falls on stage, there is always something to watch.

I am incredibly honored to be working with such a strong cast. They’re the ones that breathe life into this production. Their hard work and dedication have been so beautiful to watch throughout this process.