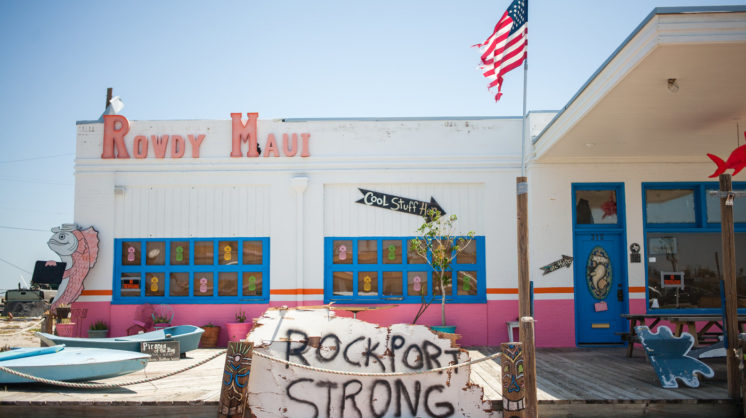 A piece of wood propped up outside local shop Rowdy Maui in Rockport, TX displays the message, "Rockport Strong." Taken by Rachel Benavides

Five years ago, on August 25, 2017, Hurricane Harvey made landfall in the Coastal Bend. What started as a tropical wind off the west coast of Africa on August 13, transformed into a category 4 hurricane by the time the eye made landfall on San Jose Island and then near the Rockport-Fulton area the evening of the 25th. By August 27, Harvey had dumped 27 trillion gallons of rain over the state of Texas and Louisiana.

Acting as the first Category 4 hurricane to make landfall along the Texas Coast since Hurricane Carla in 1961, Harvey left a wake of destruction in its path, with various structures, residences and businesses in Corpus Christi, Rockport, Fulton, Port Aransas, Aransas Pass, Ingleside, Port Lavaca, Copano Village and Ingleside taking hits. Tens of thousands of South Texas residents and businesses were left without power and significant destruction.

Five years later, we look back at the devastation the storm brought to our Coastal Bend community and check in with a few organizations and businesses still dealing with the effects of Harvey.

The Bend: How was Rockport Center for the Arts affected by Hurricane Harvey?

Luis Puron: Our facility was completely destroyed by the hurricane. As a result, we have occupied a total of five transition spaces since August 2017, including one in Corpus Christi where we began our recovery planning.

LP: I remember walking into the building five days after the hurricane as though it was yesterday.  I could not believe how exposed the building was with half of the roof completely gone, and the rest of it so severely damaged.  Then, I walked around the sculpture garden, where a great part of the roof and porch had landed.  I don’t think I will ever forget that day.

TB: How are recovery efforts still affecting the center?

LP: We are in the process of completing a $12.5 million capital project that will open to the public this fall. Rockport Center for the Arts is one of the many remarkable success post-hurricane success stories. We could not be more thankful for the blessings we have received so that we can continue our mission in facilities designed with multidisciplinary arts programming in mind.

TB: How was the Coastal Bend Food Bank affected by Hurricane Harvey?

Bea Hanson: The Coastal Bend Food Bank warehouse lost its roof, and the building was under three inches of water. Despite the circumstances, the staff jumped into action, food and funds donations came from all over the nation, and volunteers flooded our facility to help pack and distribute food. The community came together to help one another like never before.

BH: Five years later, a memory that sticks with me is how our staff mobilized and hit the ground at full force to receive, pack and distribute food and supplies to everyone affected. We learned more about how to be a team and work in unison. I also remember how our Rio Grand Valley Food Bank friends showed up for us and helped us serve more families.

TB: How are recovery efforts still affecting you, your business and/or the community?

BH: We added more distributions to the areas to a few of the areas that felt a direct impact of the storm, such as  Rockport, Aransas Pass and Ingleside. We have been told by a few residents in the area that they are still trying to fully recover.

David Bendett: The coffee shop was completely destroyed not only due to high winds but mainly due to the incredible storm surge that came in from the bay. We had a three-foot water line in the entire building, all of which was seafood, trash and debris from houses and storage units that got hit as it headed across state HWY 361. We lost most of our furniture and equipment and had to completely gut the shop due to water damage and mold.

DB: The greatest memory is that of serving the community fresh cowboy coffee made on our sidewalk that we gave away for free. We donated hundreds of pounds of coffee that brought incredible love and comfort to so many hurting people. We also had teams set up prayer tents to pray for those hurting and in need. It was such a special time to come together as a community.

TB: How are recovery efforts still affecting you, your business, and/or the community?

Luckily, we have fully recovered. We were able to rebuild the shop even better than before, and when it was all said and done, we truly were #PortAStrong. Our business has thrived and the community came together more than ever before to support the local businesses that make Port A so much of what it is today.