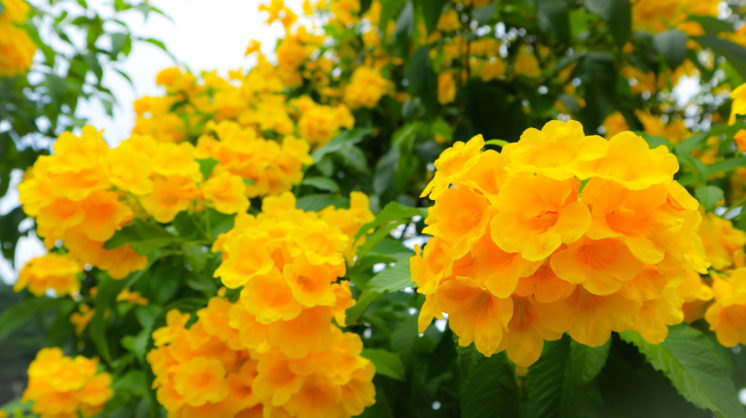 All plants are special, but some plants are super stars. Esperanza is a legitimate superstar with the credentials to back it up. In 1999, Texas A&M University selected esperanza (Tecoma stans) as a “Texas Super Star.” This is actual rock star status for plants; a committee of horticultural experts at Texas A&M use a variety of criteria to recognize the best performing garden and landscape plants in Texas. Any plant that makes the “Super Star” list deserves a place in the garden.

Esperanza is a tall bush native to South Texas and Northern Mexico. The most popular and best-performing variety is Gold Star, also known as Yellow Bells. This variety was discovered growing in a private garden in San Antonio, and is now the dominant and usually only variety sold in nurseries. For centuries prior to European colonization, Native Americans used its branches to make bows and its roots to make beer.

The foliage of esperanza is a deep, dark green. The flowers are bright yellow and grow in voluminous clusters all over the plant. If unpruned, esperanza will grow into a roundish bush with spindly branches extending at random and waving in the wind. This is probably the least attractive form of the plant, but it’s easy to prune into various shapes. Prune the base into two or three main branches, then trim any shoots from the lower half of the plant to create a tree-like shape. A neat trick is to prune the plant in this manner, then tie the branches close together at about 36”. The upper branches will flare out above this point to create a lovely, tree-like canopy. You can check out esperanza in their natural state growing along Shoreline Drive in the downtown area.

Spacing, 3’ to 4’. Height, 6’ to 8’ or up to 20’ if protected from frost and freezing. Easy to grow. Plant from transplant in full sun; can tolerate afternoon shade. Plant in any well-drained soil and water until established. Extremely drought tolerant. Withstands the worst summer heat, wind and drought with occasional waterings. Add several cups of organic compost per plant in spring; no fertilizer needed. Mulch with native leaves or plant several trailing lantana as ground cover and a living mulch around base.

Esperanza grows into a tall bush. As the plant grows, prune the base of the bush into two or three main stems and keep shoots trimmed from lower 36” of plant. Many upper branches will grow from this solid base, creating a neat, upright appearance. The plant will be covered with gorgeous, golden blooms from April through the first frost. Bees love esperanza blooms! If the plant dies in a freeze, prune back to lower stems and new growth is rapid in spring.

Esperanza can be planted along a wall or fence as a gorgeous hedge, or use several to fill the center of a large planter surrounded by numerous smaller plants, such as turk’s cap, shrimp plants or smaller flowers — sunlight generously penetrates the canopy of esperanza.

Native Americans made powerful bows from the branches of esperanza. To make your own bow: Cut the straightest possible esperanza branch to a length between 48” and 60”, then cut notches one inch from each tip for the bow string and order a recurve or longbow string  to fit the length. You will marvel at the power and accuracy of your homemade esperanza bow.