For the Love of Tacos - The Bend Magazine 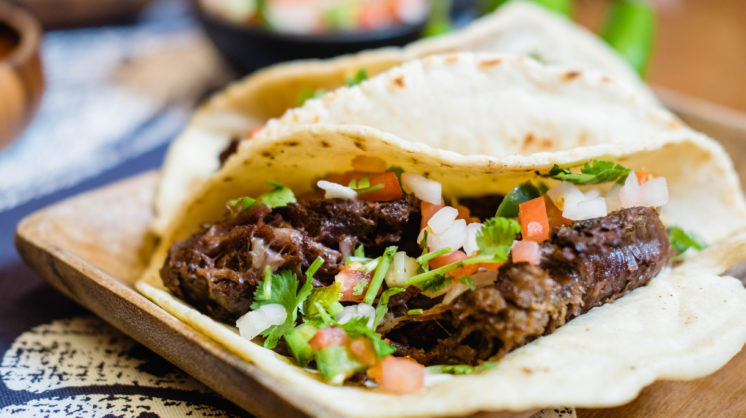 Life without tacos would be no life to live. Why do we feel so invested in an item of food? A simple answer could be summed up in to one word: culture. Although, it goes a little deeper than that. There is an emotional attachment we all feel towards the taco. The taco is essentially, one way or another, a part of everyone’s

In the Coastal Bend, tacos reign supreme over all other food groups. It is a simple fact known to all. However, the amount of choices one has when it comes to narrowing down their pick can be a little overwhelming. We partnered up with Gerald Flores – whose brand, Taco Gear, revolves completely around the food item – to create a helpful guide to the taco scene. As our local taco expert, we thought it fit to seek his help in producing a list separated into 7 different categories to assist you in navigating all your options. Gerald Flores knows a thing or two about tacos. His brand, Taco Gear, has an identity wrapped completely around the taco. While the brand as a whole started almost by accident, his love for tacos is no coincidence. With three taco tattoos adorning his body and a want for more, he is not messing around. One day, he began searching online for a shirt that would help him express his love for the taco and came up short. With a graphic design day job, he decided to create the perfect shirt himself. It was only after posting on Instagram, to his then 150 followers – which has since sprung to over 21K followers who share a love for all things tacos – that Taco Gear became a full-on brand.
Tacos are a cornerstone in Flores’ life. “Like many Latinos, tacos were and continue to be a huge part of my life,” he says. “I was raised on tacos – they were everywhere. No matter your skin color, tacos (especially in South Texas) are all something we love and can agree on.” He goes on to explain that the statement, “Let’s go get tacos,” alone can trigger more emotion than any other food. “It symbolizes the act of bringing people together. I realize all food does that; but, there’s just something about the taco that drives home so much more emotion.” Barbacoa is believed to have originated centuries ago in Barbados. This method of cooking was eventually taken to Mexico where the meats are slow-roasted over an open fire, or more traditionally, in a covered fire pit. The meat (typically sheep, goat, or beef) is cooked until tender and succulent.

OUR GO-TO PICK: SONNY’S BARBACOA
Sonny’s Barbacoa is a rather small joint that packs in a whole lot of flavor inside its doors. Trey Hoskins took the restaurant over from his father, Sonny, and kept their traditions alive. Preparing Barbacoa tacos is second nature to Trey and his family. He remembers Barbacoa being a special weekend treat when he was a child. Mom would be in the kitchen getting everything ready, while Dad would go out and buy the meat. With Sonny’s, they wanted to share that special feeling with their patrons. Trey refers to the Barbacoa taco as their “calling card.” It is their identifying mark on the Coastal Bend taco scene, which would explain why it’s in the name. Their Barbacoa is made from prime cuts of meat to assure the freshest and best tasting tacos. This no-fail, namesake menu item is served more than any other dish. Fish Tacos
What would a Coastal Bend taco guide be without mentioning fish tacos. People have been eating fish tacos in the coastal areas of Mexico for quite some time. However, it is in Baja, California where the fish taco we know and love today was born. Lightly battered, deep-fried white fish and a corn tortilla are the key elements to any tasty fish taco.
OUR GO-TO PICK: JAYCOB’S DELICIOUS FISHES
It could be said Jaycob’s Delicious Fishes and Other Dishes was written in the stars. Jaycob Jones started cooking when he was just eight years old. He would help prepare dinner for his family. By the time he was twelve years old, he had thought up the name “Delicious Fishes” and knew serving food to others would be his life mission. The original plan behind the food truck was to serve workers in Port Aransas after Hurricane Harvey. However, Jaycob did not stop there. He brought the truck to Corpus Christi and began serving anyone he could. When ordering a fish taco from Delicious Fishes, you can expect, you guessed it, delicious fish. Yet, some things you might not expect are flavors like jalapeño and lemon tartar sauce or cilantro and lime coleslaw. Both their flavors and attitudes are vibrant, and you can taste it in every bite. Back in September, they won the category of “Best Fish Taco” at the ¡Que Bueno! Taco Fest. Take one bite, and you will understand why.
@jaycobsfoodtruck (361) 704-5732 Street tacos are usually made with smaller tortillas, which are mostly corn and doubled up before the meat and toppings are added. They typically come in a grouping of three to five and can be easily eaten with one hand.
OUR GO-TO PICK: TAQUITOS MI TIERRA
The idea for Taquitos Mi Tierra came into existence years ago when Ino Lugo’s mother decided to quit her job and buy a food truck. After many trials and tribulations, Ino and his sister decided to join in and help create what would soon become Taquitos Mi Tierra. They knew the success of the business would come from their mother’s authentic Mexican cooking, so she became the head chef behind the food truck.
While the siblings knew how good their mother’s cooking was, they felt it necessary to share her talents with the rest of the community. When ordering from Taquitos Mi Tierra, you can expect the bold flavors of authentic Mexican food, a variety of award winning salsas, flavorful charro beans, and of course, mouthwatering street tacos. There are six different meats to choose from. An order of five street tacos comes topped with grilled onions and cilantro on mini corn tortillas.
@minitacos (361) 355-2163 We took to social media to ask our followers where their go-to taco spot is. We decided we would share the most mentioned place to let you know what the locals’ go-to pick for tacos is.
LOCALS’ GO-TO PICK: NONA’S COCINA
Nona’s Cocina has only been open for a little over a year and a half and has already gained a tremendous following with nothing but rave reviews. The mastermind behind the restaurant is Erica Franco, who immigrated to the United States from Victoria, Mexico in 2014. She came equipped with a genuine love of cooking and a treasure trove of family recipes passed down through generations. What started as a catering gig soon turned into Nona’s Cocina, and Erica has been serving up delectable food ever since.
Initially, Nona’s exclusively sold food through the Howard’s BBQ drive-thru. They quickly evolved their business into a food truck and now have a brick-and-mortar restaurant set to open soon in the Hamlin Center.
While each of their menu items is equally yummy, their tacos definitely don’t disappoint. One favorite is the Cochinita Taco, which consists of traditional Mexican pulled pork marinated in achiote. A unique taco can mean many things. Being different than others is a hard thing to do nowadays, but we found someone whipping up tacos using a most unusual method. There are no meats or veggies involved in the making of said taco. In fact, there is nothing savory about it at all.
OUR GO-TO PICK: ROCK AND ROLLIN
This taco is unlike any of the others you’ll find on this list, but it definitely belongs in this category. One of the best things about tacos is the convenience of eating something delicious using one hand and no utensils. The same can be said of this uncommon menu item, the Ice Cream Taco from Rock And Rollin.
Owner, Charoen Kaewmanorom, brought the method of rolled ice cream – a method she picked up in Bangkok – to the Coastal Bend earlier this year and has continued to see great success. The Ice Cream Taco is made with the freshest of ingredients, rolled up on their cooling ice pans. The rolls are then placed into a waffle cone shaped like a taco shell. You can create any flavor you’d like from the endless choices of distinctive topping combinations.
2033 Airline Rd. (361) 444-5275 When you want a quick, hot morning meal, the Breakfast Taco conquers all. Whether you are on your way to the office, heading out of town, looking to enjoy a meal with the whole family, or simply need a hangover cure, the breakfast taco can do no wrong. With endless variations, the breakfast taco can be just about anything you want it to be.
OUR GO-TO PICK: HI-HO RESTAURANT
As one of the most cherished and oldest taquerias in town, Hi-Ho Restaurant, which opened 41 years ago, is undoubtedly the go-to place for breakfast tacos. The current owner, Ray Garcia, took over about eight years ago and has continued with the restaurant’s original recipes. To him, the key to the perfect breakfast taco is the tortilla. Over 2,500 tortillas made from Hi-Ho’s recipe are cooked up fresh every day.
When arriving at Hi-Ho, you’ll be greeted more often than not by Ray, himself. The connections and friendships he has made over the years is one of his favorite parts of owning the place. The Suicide Taco – which is essentially three tacos in one, consisting of chorizo and egg, potato and egg, bacon, beans, and cheese – is one of their best sellers. If you aren’t in the daring mood, try the carne guisada, sausage and egg, or the chorizo and egg, all of which are among their most popular orders.
3703 Morgan Ave. (361) 888-4992
Gerald’s Thoughts – A Corpus Christi staple for breakfast tacos where Selena would eat! What more could you ask for.
Share