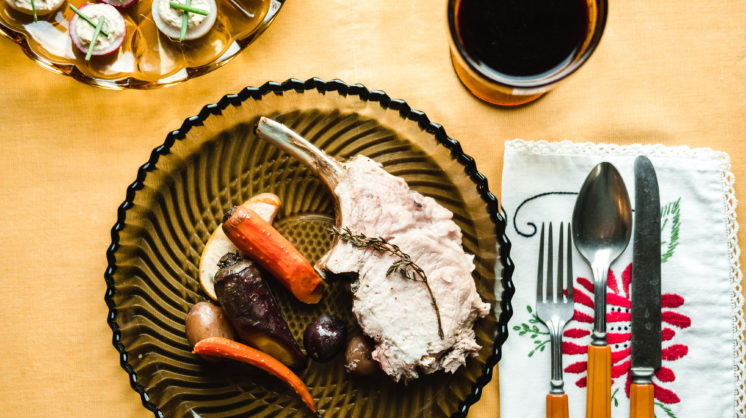 Let’s take a food time machine back to 1969. If you like “Mad Men” and moon landings, you will love pork crown roast and baked Alaska.

These dishes have origins in upper-class Victorian England, where, it should be noted, servants prepared the meals. These showstoppers experienced a resurgence in 1960s America, when Ward and June Cleaver became the stylized role models of marital bliss. Suddenly, housewives were expected to feed their upwardly mobile husbands like British lords. Crown roasts and baked Alaska became status symbols on the polished Formica tables of suburban America. But these status symbols happened to be quite delicious.

A pork crown roast is a bone-in pork loin, formed into a circle with the bones pointing upward like an English crown. The butcher at Moody’s Meat Market will form and tie your roast; ask him to “French” the roast, which means to cut the meat from the top of the bones to give it a clean appearance.

If you want to go fully 1960s legit and place tiny paper hats atop the bones, be sure to order them online well in advance. Crown roast hats are (apparently) not sold locally.

Most crown roast recipes call for cooking the vegetables separately and adding them to the center of the roast, like stuffing, just prior to serving. But we cook our veggies with the roast so that they absorb that amazing, robust flavor. We also wrap the crown in bacon, because who wouldn’t want a bacon-wrapped crown?

If you have never tasted baked Alaska, get ready to swoon. This dessert is cake, ice cream, and pie all baked together – what could go wrong? This dish was invented in 1804 by Count Rumford to prove that meringue is a poor conductor of heat. He scooped ice cream onto a cake sponge, covered it in meringue, then baked it. The meringue browned, but the ice cream stayed frozen.

Baked Alaska got its name when a chef at Delmonico’s in New York prepared this dessert to commemorate William H. Seward’s negotiation of the Alaska Purchase in 1867. “Seward’s Folly” gained us a new state and the best dessert name ever.

Crown roast and baked Alaska are just as good today as they were back then. It’s time to dust off the old recipe cards for these retro recipes!

We’d like to extend a special thank you to Terry, “TW,” at Moody’s Quality Meat for his exceptional customer service.

Blot roast dry with paper towels. Brush roast with olive oil. Combine salt, pepper, garlic, and half the herbs in a medium-sized bowl. Massage garlic-herb mixture into the inner cavity and exterior of the crown. Using toothpicks or wooden skewers, affix bacon slices to the bottom half of the crown. Transfer crown to a roasting pan.

Bake in preheated oven until internal temperature reaches 145°F, or for about 2 hours (12 minutes per pound). Remove roast from oven and let set for at least 10 minutes prior to carving. Serve with cooked apples and vegetables.

Directions:
Spray a 1½ quart bowl with non-stick cooking spray and line with two pieces of plastic wrap long enough to have a few inches of overlap on each side. Scoop ice cream into bowl, alternating flavors as you go. Cover ice cream with plastic wrap and press down with a spatula to remove any air until flat. Freeze for 60 minutes.
Remove ice cream from the freezer. Unwrap ice cream and place the sponge cake on top. Place back in the freezer for another 30 minutes.

Preheat oven to 500°F. With an electric mixer, beat the eggs on high for 2-3 minutes until soft peaks begin to form. With the mixer on high, gradually whisk in sugar and cream of tartar, a little at a time, until glossy, stiff peaks are formed.

Remove the ice cream cake from the freezer and place sponge side down on a baking sheet. Remove plastic wrap and cover with an even layer of meringue. Using a fork or the back of a spoon, form swirly peaks in the meringue. If ice cream starts to melt, return it to the freezer for about 15 minutes.
Bake for 2-4 minutes, until peaks are golden. Serve immediately.