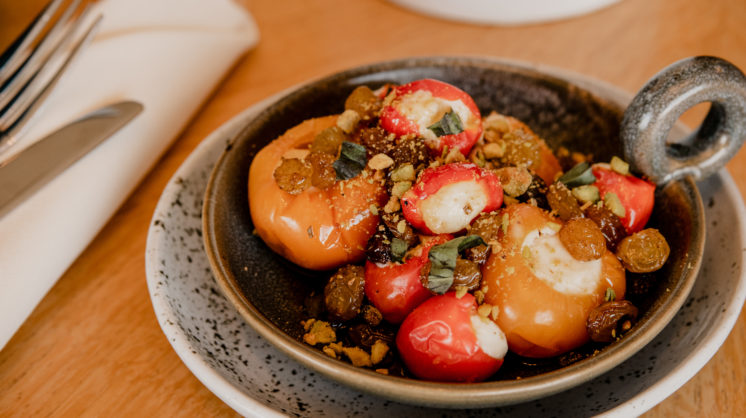 Have you heard about that new cafe in the Art Museum of South Texas (AMST)? Yes, the one that is owned by Water Street Restaurants, but rumors are swirling that it’s a far cry from anything you’ve ever experienced from those dining experts? Of course you have. The buzz is so wild that hearing about it and getting a reservation are two different things—the latter being an incredibly sought-after dining experience. Inspired by the vibes of AMST, Elizabeth’s at the Museum was conceptualized according to its location, both at the museum and perched on the edge of the bayfront with those spectacular views. “Knowing it was such a unique venue, we wanted an equally unique concept that matched the museum’s purpose and energy,” explained Richard Lomax, owner and operator of Elizabeth’s and Water Street Restaurants and Catering. “In working with the creative team, we started with what we thought would fit AMST’s history, bay views, and most importantly its purpose to display beautiful and novel things to the community.”

Elizabeth’s is a surprising departure from expectations. Both Water Street Restaurants and AMST have long-standing histories in the community, so to take on the task of bringing something new meant putting the best cutting-edge culinary team together to curate a dynamite menu.

With a regional Mediterranean flair, and the desire to invoke a shared eating experience, Elizabeths’ menu is full of tapas-style nosh that is rooted in high-quality, fresh ingredients, and honoring those ingredients to let them shine.

Banquet and catering manager Jackson Hayes said he, Chef Jeremy Battle, and the rest of the team tested five different recipes for the burrata dish alone. “We ended up going with a super simple rendition because with quality ingredients, you don’t need to overdo it,” said Hayes, who is starting to be known affectionately as “Bread Bae.” (If you haven’t seen the photos of Hayes’ mega-popular focaccia bread, head over to Instagram ASAP.) Speaking of bread, on the menu are two flatbread dishes that are simply luscious. The Casablanca is adorned with a white sauce, ricotta, caramelized onions, garlic, fig jam, and basil. While it is enough to share, be warned that you won’t feel so inclined to do so. In which case, an order of the Blistered Shishito Peppers with whipped feta and pimento aioli will be the next star to steal the show.

Chef Battle says having the opportunity to develop such an exciting lunchtime menu has been fuel for unleashing creativity while working on the dinner menu. “With the dinner menu, we have a lot more room to play around,” he said. Keeping focus on the experience they are striving to offer diners – one that is specially curated for people and meant to be casual, educational, and enjoyable – is the secret ingredient to this successful new venture.