El Que No Arriesga, No Gana - The Bend Magazine 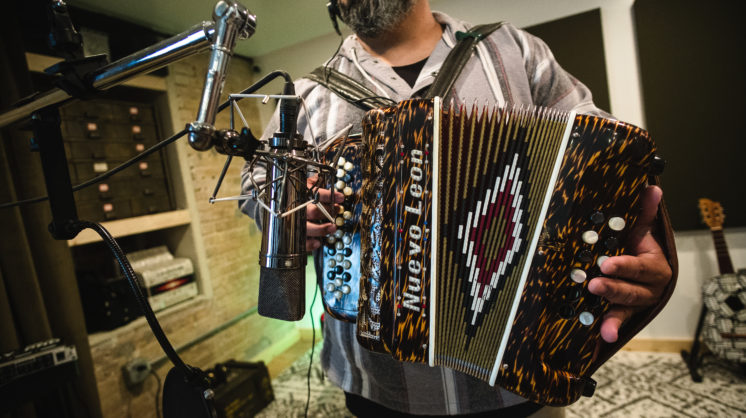 He who does not take risks, does not win. It’s what Mariano Herrera’s father told him in his youth, what he tells his son and daughters now. And to Herrera, this isn’t an empty lesson he passes to his children like the last dichos, but an aphorism he embodies. Herrera took risks in his career, and won Grammys for it.

Herrera grew up in Aurora, a large suburb of Chicago known as the setting of the ’90s comedy Wayne’s World. He grew up listening to Tejano musicians like Jimmy Gonzales and Los Palominos. By the age of nine, he’d learned the guitar in order to play with his father in the church band. For most of Herrera’s youth, music was a means of communicating with God, a means of “giving back the blessing he provides for us,” Herrera says.

Since Herrera felt musically fulfilled in his religious life, he did not initially pursue a musical career. He took what he referred to as a “regular” job fixing computers for General Electric – until 2001, when the Aurora branch was sold and multiple workers were laid off. Frank Zuniga, a Corpus Christi-based producer and agent, put Herrera up with the band La Sombra. The band, originally from Aurora, moved to Corpus for access to its label, Freddie Records.

By 2006, he was playing with La Sombra and DJ Kane of the Kumbia Kings, and he’d met Freddie Martinez, the founder of Freddie Records. Martinez, a six-time Grammy winning artist and producer, would eventually become Herrera’s mentor. “I didn’t know much about the studio other than how to press record,” Herrera says, but the experienced sound engineers trained him quickly. Herrera picks up anything musical with rapidity — according to El Dusty, who also played with DJ Kane’s band in the early aughts, Herrera was known as the guy who could play anything.

“He would play bass with one hand and keys with the other,” Dusty says. “You hear bass, and horns, and drums, and keys, and you turn around to see Mariano and just one other guy. He’s really a sponge.”

But Mariano is a family man, a homebody, and the touring life wasn’t his style. His whole family resided in Aurora, more than 1,000 miles away. And although his family supported his dreams, the costs of pursuing music appeared to outweigh its benefits. So, in 2007, Herrera’s family moved back to Aurora.

“It was worse than what we had in Texas,” Herrera says. “The grass wasn’t greener on the other side.”

After three years in Aurora, without luck and without music, Herrera called Freddy Martinez. At the time, the label needed a sound engineer to work with the band Siggno. Herrera took another risk, and came back to Corpus.

Herrera began to pick up the essentials of sound production from Martinez, from instrumentation to work ethic. “[Martinez] is 80, and coming in and out of the studio, when he could be on vacation,” Herrera says. They worked efficiently, morning to night, starting instrumentation on Monday so they could move to vocals by Wednesday. Herrera credits his current savvy and knowledge of the business to Martinez’s mentorship. Soon, he was working with artists he idolized in his youth. He played tracks for Los Palominos, and shared tacos at 7 a.m. with Jimmy Gonzales, who would take morning sessions against his circadian inclinations just so he could record with Herrera.

“What tripped me out is that all the blessings started after I started the church,” Herrera said. He’d been religious his whole life, but failed to find a church in Corpus during his first stint in the city. Upon moving back, he joined Solid Rock church, and began working sound at their services. “It was 15 years without God, and we struggled a lot,” Herrera says. “I have a lot of faith, and I think the church is what’s motivating me to keep going.”

By 2017, the blessings begat Herrera’s first Grammy, for Los Palominos’ album “Piénsalo,” soon followed by his 2019 Grammy for Elida Reyna y Avante’s album “Colores.” Herrera wonders how the 1995 version of himself, listening to Los Palominos and Elida and Jimmy on the radio in Chicago, would react to his current self.

Current Herrera may feel blessed with success, but he works harder than ever before. Three years ago, trap-cumbia trailblazer El Dusty signed with Universal Records. Dusty said he “bribed” Herrera to run his new studio, and the two have worked in tandem ever since. In the mornings, Herrera still works at Freddie Records, but the afternoons and evenings are with Dusty at PRODUCE. And his process changes along with the studio – while at Freddie, Herrera often writes music to match a set of lyrics, Dusty’s hip-hop influenced compositions often begin with a beat or sample, and the sentiment follows.

Herrera said that he and Dusty share the same vision. They both love being at home, so touring occurs on weekends, and Herrera makes it back on Sunday for church. But although they share the same passion, they don’t share strengths. Dusty comes from a sample-based musical background, in which producers layer sound without much attention to formal categories like scales and keys. Herrera is a trained acoustic musician, who can hear a dissonance hidden beneath layers of sound. When the two musicians collaborate, they merge their methods, and teach one another new tricks.

“He’s definitely in my corner, fixing keys, making sure we have the proper chord progressions,” Dusty said. “For him, I’ve simplified things. When he first came around, he’d have nine fingers on the keys to play a G minor. And I told him, ‘Pick this one up, this one up, this one up, and this one up.’ He’d be left with a less-lavish G minor that fit easily with hip-hop.”

The two also complement one another on tour. Herrera prefers the background work; he drives the car, wakes up the band, gets people showered and paid. Humility is his defining characteristic, and he wants to make sure Dusty has an opportunity to shine when he performs.

“I’m the old guy in the band, that’s what I need to do,” Herrera says. “The engineer’s job is real tedious, and it goes unnoticed sometimes but it’s what I love to do–it’s my passion.”

Herrera often expresses gratitude for being able to do what he loves to support the people he loves: his wife and three kids, all of whom stumbled upon musical talent. During quarantine, Herrera is helping his college-age son engineer his own beats, and Herrera’s daughter is teaching herself the ukulele. The path to success may have been rife with risk, but Herrera won in more ways than one.