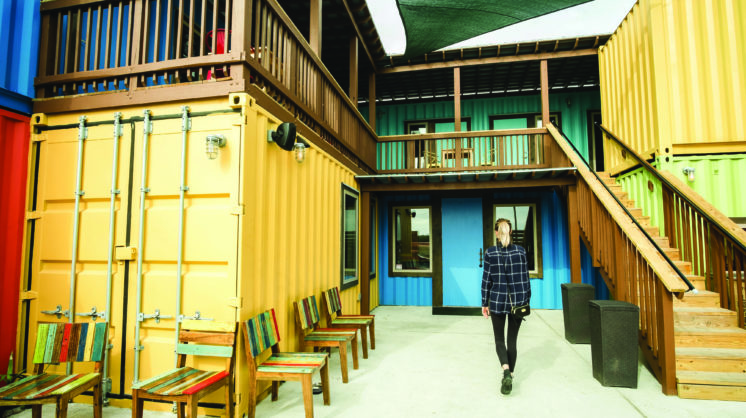 Driving onto North Padre Island, one is hard-pressed to miss the towering stack of brightly colored shipping containers along the highway. This Lego-like construction is the new location for coffee shop, Island Joes Coffee and Gallery, owned by Bryan and Brenda Tumlinson. It is the result of collaboration between Bryan and his son, Andrew. Together, they built the new site, which extends up two floors and incorporates a total of ten shipping containers, almost entirely by themselves.

Island Joes has been a local favorite since their opening in 2014 and has been unique from the very beginning. When opening the shop, Bryan said he had to consider the reality of coffee shops in South Texas. “We sell more cold drinks than hot drinks. Summer time is our big time, versus coffee selling more in most markets is the wintertime.” To cater to that cold drink necessity, Bryan invented the recipe for their now well-known Mexican Vanilla Cold Brew coffee.

The unique properties of the shop continue as these shipping containers come together to create an eclectic space which boasts an impressive set of two separate coffee bars. The main bar, which was built with wood from the destruction of Hurricane Harvey, has the espresso machines and options, while a side bar has cold brews and slow pours. The indoor space has a conglomeration of textures and feels in keeping with the colorful standard they have set on the outside. Bryan explains, “It has an industrial, island, eclectic kind of vibe.” The upstairs is comprised of micro-offices, which can be rented out by local businesses, as well as outdoor seating.

Bryan also plans on making the new Joes a hub for arts and culture in the Coastal Bend. At this new location, Bryan hopes to bring in artists from all over the state to come and perform their original music for Island Joes’ guests. On the 1800 square foot patio, along with a host of games for guests to play, the new Island Joes will also feature a movie screen for screening independent films as well.

The Tumlinsons have big plans for the future of Island Joes. While this Padre Island location will be the flagship store for Island Joes Coffee and Gallery, Bryan hopes to eventually expand into other areas of the Coastal Bend. With their creativity and love for the Coastal Bend, there is no doubt they will do just that.