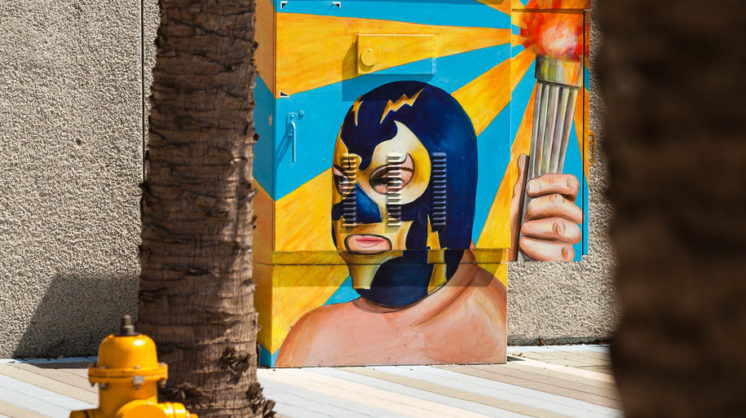 From the bayfront Miradores to the parapets of the Art Center, Shoreline Drive pops against the sparkling background of the bay…postcard perfect. But as beautiful as our city is, we all know that other corners of downtown can feel a little quiet sometimes. Corpus Christi is full of life, tradition, ingenuity, and community spirit, but the empty storefronts and weathered historic buildings of downtown don’t reflect that. In recent years, innovative entrepreneurs, artists, and organizations have been breathing new life into the older streets of downtown, turning an old bus station into one of our trendiest patio bars, building luxury apartments, and beautifying our streets with murals. Downtown has made big strides, but there’s still work to be done.

That’s where the Downtown Revitalization Alliance comes in. Led by a board of former Downtown Management District employees, community leaders, and creatives, the Alliance is the nonprofit arm of the Downtown Management District. Though this Alliance was founded in 2012, it was inactive for several years and recently revitalized itself thanks to the initiative of Downtown Management District Executive Director Alyssa Barrera-Mason. After the creation of the cultural district, Barrera-Mason and her team saw the opportunity to reactivate the 501(c)3 and align it to DMD’s arts and culture initiatives. “There are some things that are reasonable to spend on with those dollars, but the arts are not the most core service activities,” Barrera-Mason explains. “When we talk with potential contributors, they’re more interested in a nonprofit than a municipality, so the 501(c)3 is a tool to garner resources toward revitalization.”

The Alliance’s mission is to create a culture and environment that attract businesses and residents, and reflect the creative brilliance of the community. “Arts and culture is the heartbeat of your community,” says Barrera-Mason. “The downtown is the face of your city and needs to reflect your people and their creativity.”

Some of the Alliance’s recent projects include the electrical box murals dotting the streets, and the popular Downtown Corpus Christi Coloring Book, which raised money to support revitalization efforts. Ensuring that Corpus Christians can earn a living as artists in the community is important to the Alliance. “I’m not an artist,” Barrera-Mason says, “but I definitely have respect for artists, and I’ll utilize my position to advance our community and the creative members of our community.”

Currently the Alliance’s biggest endeavor is revamping Artesian Park. “Artesian Park is the third oldest park in Texas, and the oldest piece of public property in our city,” Barrera-Mason says. “So why isn’t that on the list of top ten things to do in our city?” Maximizing Artesian Park has long been a goal for the city, but “plans were often thwarted by dreams that got too big.” So the Alliance is taking things one step at a time. They started by securing sponsorships for electricity in the park, which allowed them to light up the trees for the holidays. Next, they repaired the pergola, and recently were allocated $150,000 from the city for improvements, such as landscaping. The vision, says Barrera-Mason, is “a town square, a widely-utilized public space for tourists and resident pride.”

If that vision is any indication of how the Alliance may lead the way toward a fully revitalized Downtown, then we are in good hands, indeed.