Between the Ropes: Duke It Out Boxing Club - The Bend Magazine 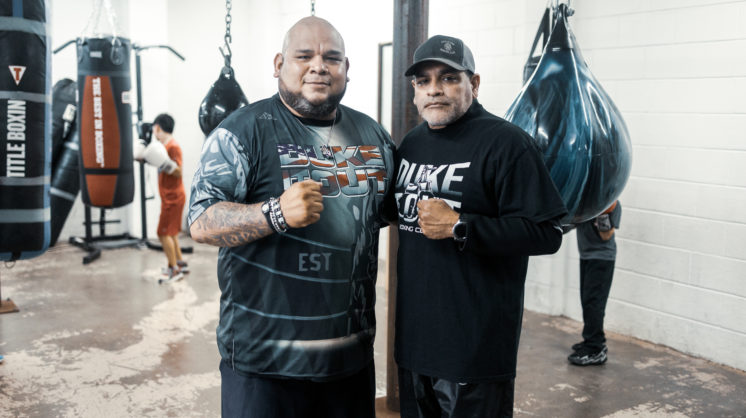 Boxing is an individual sport. Once you step in the ring, the outcome relies on your mindset and performance. The sport builds character and friendships, and provides physical and mental health benefits. In Corpus Christi, Duke It Out Boxing Club is a gym centered around giving back to the community and providing a safe and encouraging environment for Coastal Bend youth.

Established in 2018 by Coach Duke, Duke It Out Boxing Club initially started with three boxers and a coach with aspirations to provide a safe haven for his students. Since the gym’s genesis, Coach Duke partnered with Coach Joe De La Paz to further Duke It Out’s mission by turning the business into a non-profit organization where all the coaches volunteer their time to the kids. In a short amount of time, the club grew from one coach and three boxers to five coaches and 50 boxers.

Coach Joe’s sincere determination to give back is evident as he describes how they want the gym to be a second home for the boxers; a bully-free zone where the kids can come and block out any distractions and focus on developing themselves. When talking to his boxers, Coach Joe says, “You are not here just to box. You are here to learn and achieve your goals.” He pushes his boxers to improve both mentally and physically.

Coach Duke, meanwhile, is the reason for Duke It Out Boxing. Without him, the movement would not have started, or have its ethos of paying it forward. Amid all his effort to organize and champion Duke It Out Boxing, Coach Duke says that “The best part of this is when they win; when they step out of the ring with joy on their face; as they are greeted by their parents after a good fight. Those are the moments I love.” Duke It Out Boxing Club is an oasis, not merely a gym. Coach Joe described how the program has changed the trajectory of lives by introducing boxing as a great workout, as many of his students have benefited from tremendous physical improvements, losing weight and restructuring their body composition. Some boxers benefit from the community around them by building a brother/sisterhood with their colleagues. The sport develops mentally tough people, and if one can find success in the ring, one can find success in any goal worth achieving. “Who knows? We may have the next mayor of Corpus Christi in our gym right now. It’s up to us to provide that space for them,” says Coach Joe.

Duke It Out Boxing has aspirations of becoming the next Boys and Girls Club or YMCA of Corpus Christi. Already involved in local events, the team believes in community building and supporting the goals of other organizations in the area. Duke It Out is also holding a fundraiser to support the gym on Oct. 29, with legendary boxer “Sugar” Ray Leonard as a keynote speaker. With all this traction and a strong team, the Duke It Out team could realize its goal of growing into a 300-boxer gym. They may have our next generation’s leaders of Corpus Christi in their corner.