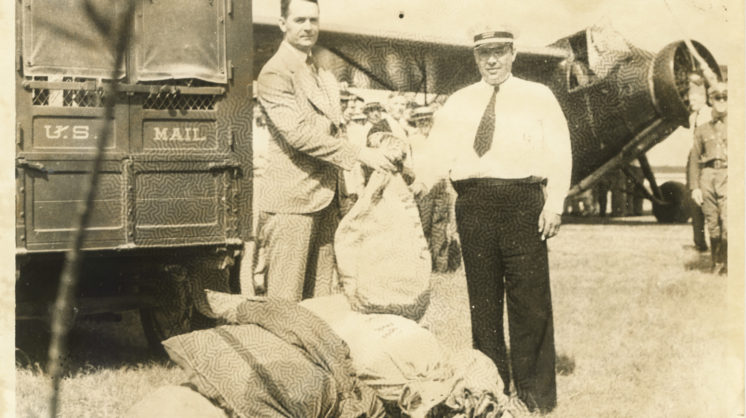 When we drop a letter in the mail now, we know it may take varied forms of transportation to get to its destination, from the mail truck to a plane. But until the 1970s, post office patrons had to purchase a special airmail rate to ensure their delivery would get the quickest transport via airmail. Experimental airmail flights started in 1911, just eight years after the Wright brothers’ famous flight. After years of experiments and governmental red tape, the Post Office Department and the Army Signal Corps cooperated to begin scheduled airmail service, giving Army pilots needed flight practice.

By 1920, a transcontinental route was established, with mail flying by day and traveling by rail at night. This route reached many of America’s large cities, with feeder lines reaching outward to places like St. Louis and Minneapolis. The service quickly modernized, adding overnight flights on planes equipped with luminescent instruments and navigational lights, before contracting out service to commercial aviation companies in 1926.

On June 1, 1932, Corpus Christi Postmaster Gilbert J. McGloin marked the occasion of Corpus Christi sending its first mail off for delivery via airplane, and posed with the pilot for a ceremonial handoff. Forty-five years after the arrival of the railroad in Corpus Christi and six years after the opening of the Port, airmail service even more strongly connected Corpus Christi’s residents to their fellow Texans, Americans, and the world.