A Tasteful Crescendo - The Bend Magazine 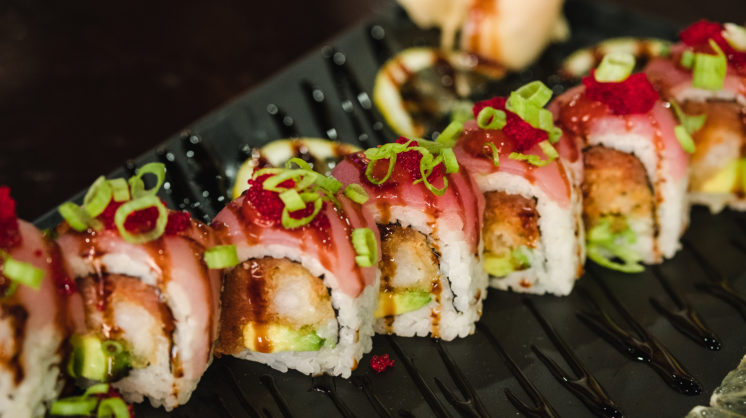 Cornering the bustle of Staples Street is the aroma of Crescendo Cafe, a fusion restaurant that brings new taste-pairings and spin-offs to its listening (and hungering) audience. Originated in Los Angeles as an ice cream shop, the goal for this sweet spot was to bring its ideas to big Texas. However, when the ball started rolling for its South Texas operation, Crescendo decided to march to its own beat.

Independent and developing its own reputation, the cafe has an aura that is distinctive on its own, and it plans to explore that.
“People come in and look around to see what it’s all about,” says manager Rosanna. “We wanted to keep it family oriented – even young people, which is why we have power outlets for students. We like the idea of people coming in and just enjoying their time here.”
Crescendo’s menu holds unique entrees for those willing to try something new. The blend of Asian-inspired classics with modern American food offered here fits well into our midday lunch daydreams. The burger ramen speaks for itself. It’s one of the hot items on the menu, and that’s because it’s literally a ramen noodle-bun burger, as in actual noodles shaped into a bun, with a fried egg and special sauce. Crescendo also prepares different styles of ramen, pork katsu dishes, and innovations that include flavors like miso or teriyaki.

One thing that might attract an on-looker seeking variety is the selection of crepes. Your sweet tooth will not go unsatisfied here, and this cafe has about eight explosive flavors for the crepe community.
“When we partnered with the L.A. company Crescendo for their ice cream, we really liked the name,” Rosanna explains. “Sushi is replacing the nitro treats, but we ended up still keeping the name. We’re planning to become a new spot for sushi.” The sushi menu rolled out after a temporary pause in business during COVID, but now the restaurant is welcoming guests for dine-in with a line of original rolls. The “Beach Boy,” “Black Mamba,” and “Hyper California” rolls are among many that are just as colorful as they sound.

“We’re going to see where this takes us,” Rosanna says. “We’re going on a year and a half being open, and COVID did take a hard hit, but now we’re open for dine-in, and the sushi menu is out.”
Whether you’re there for the vibes or the sushi, the cafe welcomes all wanderers. Bring someone who’d like to try something new to the spot, where a fusion of flavors is waiting to be combined.
Contact:
5118 S Staples St. STE C, Corpus Christi, TX
facebook.com/CrescendoCafecc |  361.442.2445
Share