A Family of Strangers - The Bend Magazine 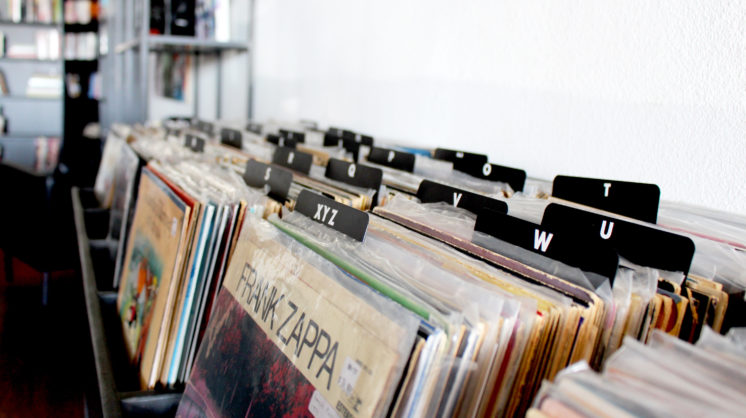 The room is flooded with natural light. There is black and red décor (mostly black) and rows after rows of vinyl. Carlos Cooper is sitting behind the desk placed at the center of the store, getting ready for the day ahead. The nature of the store is evident in the name, Hybrid Records. Yet, there is something else to be said about exactly what this place does for the community it finds itself in.

Cooper, the owner of Hybrid, opened his doors just about two years ago in November 2015. When asked when he got the idea to open the store, in true artist fashion, his response is, “about a month before it happened.” A passion for music runs in the Cooper family. His father worked in radio for as long as he can remember and his grandfather actually owned his own record store from the 60s to the 80s. So, it comes as no surprise that Cooper himself would one day follow in his family’s footsteps.

He knew Corpus Christi was lacking in the record store department. There wasn’t a type of store here he would want to go to. So, creating it himself was the obvious option once plans fell through to help a friend re-open their own record store.

While the main motive of the store is, of course, to sell records, there is a certain sense of community that has cultivated itself inside. On any given day, you can walk into the shop and find a number of things happening. Cooper will most likely be helping out customers or tending to the needs of the store. Patrons will most likely be pursuing the selection of vinyl or admiring the various local artworks displayed on the shop’s walls. Friends of the shop will most likely be sitting on the leather couch or hanging out in the newly added reading nook (which features a carefully selected curation of books and films for sale).

Yet, the thing that stands out amongst your usual record store atmosphere, is there will always be a conversation happening that, most times, includes every single person in the shop.

“The shop is a small space, so if I am talking to someone about a new movie that just came out, someone else in the store, who also has an opinion about that movie, will jump in, and then everyone is involved,” Cooper says. “Whether it is about music, or film, or even something as dumb as memes, if there is a conversation being had, we all become involved.”

This environment Cooper has created for his store is one that allows strangers to feel known and where friends can be made. The cultural gathering space that is Hybrid Records, is a place where people—of different backgrounds, different thoughts and beliefs, and different tastes in music—can come together and find a sense of familiarity. While he wanted to open up a shop for people to enjoy the full record store experience and find the niche type of music they were in to, he never imagined it would turn into what it has.

“I knew this would be a place me and my buddies could hangout, and maybe a place where people who liked the same things as us could come and find something,” Cooper says, “but the amount of bonding that happens on this leather couch, that is something I never could have imagined.”

Cooper laughs as he realizes allowing people to come into the store and simply sit and talk might not be the best business strategy, but he knows it doesn’t matter. He knows the importance of having a space for people to feel comfortable in expressing their opinions and views, and that is exactly what he has done with this store.

So, while yes, Hybrid Records is indeed a record store, it is also an art gallery, it’s a music venue, it’s a resale book and movie shop, and it’s a hangout spot, but most importantly, it’s a cultural gathering space. A place where people in this community can go and feel known.