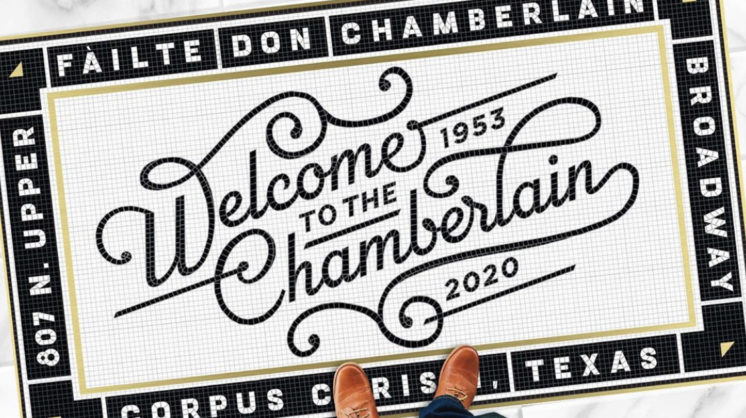 By: Luis Arjona   Photos courtesy of: The Chamberlain

Corpus Christi has a history. Unexplored history, I’d add.brLike Detroit, Michigan, the uptown and downtown areas are open for business forbrthe next generation of development, businesses, and renewed infrastructure.brLocated on the intersection of Buffalo and North Upper Broadway streets livesbrthe vacant H-E-B headquarters before their move to San Antonio in 1985. Thisbrsite’s rich history dates back to 1857 when it became the Corpus ChristibrLighthouse for nearly a century, followed by Southern Minerals Corporation inbr1953 and then headquarters to H-E-B Grocery Company in 1971. Last year, FrazierbrCompanies acquired the building with a vision for the future as ThebrChamberlain. Frazier Companies is a local, family-run, business establishedbrin 2019. Originating from their Scottish heritage, The Chamberlain was namedbrfrom the historical roots of the Frazier family. A fact that would make William Wallace proud.

“We traced back our roots to Scotland and found out abrFrazier (Fraser) was named a Lord High Chamberlain of Scotland. Also, abrChamberlain is a well-renowned business person who knows how to run a businessbrfrom front to back. So, the name is something people could identify with frombrboth outside and within the family.”

The earnest and poignant rebranding of The Chamberlain willbrsupersede the previous status of the building. Starting now and leading intobrthe prosperous future of consistent growth and local investment feeding intobrrevitalizing our downtown and uptown districts. Receiving an interior restoration provided by the excellentbrskill from Dykema Architects, The Chamberlain will cater to any businessbrlooking to upgrade their workspace. The exterior will undergo historicbrpreservation by maintaining the original Art Deco façade to acknowledge thebrcity’s history. The architectural elements that come from the Art Deco movementbrare also a lost art of initial modernization paired with attention to craft andbrmaterials. Originating in France, the architectural movement was the leadingbrstyle that would open the door for modern architecture and the International Style.brTwo influences we are familiar with in cities like Chicago and New York.brMaintaining the building’s construction history is a nice tip of the cap tobrwhat Corpus Christi once was and the promising future of our beloved city. Furthermore, the location of The Chamberlain is unrivaled,brwith beautiful vantage points over downtown and the bay. To maximize the use ofbrsuch a locale, an addition of a rooftop terrace will serve as an event spacebrnamed The Beacon. The Beacon rooftop is available for tenants and their guestsbrby reservation. Spectacular views of the bay provide the perfect backdrop forbrbusiness or celebratory events. Uniquely named for the original 1857 CorpusbrChristi Lighthouse that stood in this very spot, once again will The Beaconbrwill shine on the shore for a new generation.

brbrSet to open mid-2021, The Chamberlain is nowbrleasing its basement, first-floor restaurant / retail spaces, and second floorbrClass A offices. A total of 23,000 rentable square feet is available for lease.brIf your business is looking for a new location or community, The Chamberlainbrwill be waiting for you.