People of Corpus Captures Flashes of Community - The Bend Magazine 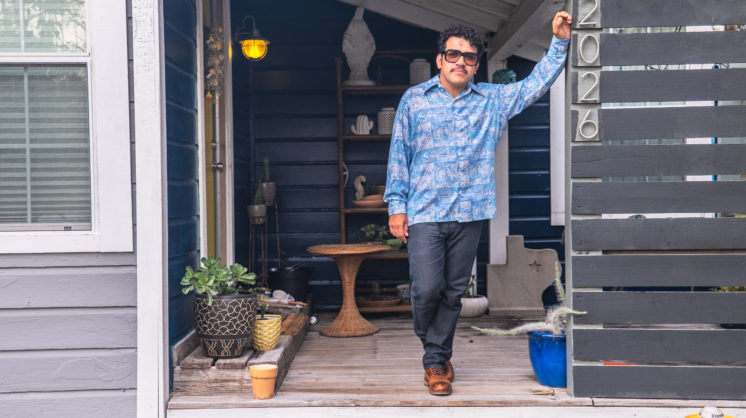 Tony Colunga leans against his porch in a graphic blue button-down and stylish glasses. Debra Knowles Molina glances over her right shoulder as she stands in front of the home she’s created years’ worth of family memories in. Josh De Leon poses with his eyes closed in the alleyway behind the local record shop he works at as the sun casts a radiant glow on his face. What do these people have in common?

They all had their portraits taken for People of Corpus, an Instagram page curated by Stephen Wincelowicz. Though fairly new, the initial idea was thought up almost a decade ago, a marriage of Wincelowicz’s two favorite things: photography and people. “This was born out of my fascination with people,” Wincelowicz says. “I’m just interested in people, in the stories they’re wanting to share with the community.”

The subjects in Wincelowicz’s photos don’t just share space on a social media app; they share space in a city by the ocean, rife with sunlight and sea breezes. But for a moment, they’re vulnerable and beautiful as the camera lens captures their various spirits. However, it prompts the question: Why portraits?

“Because [they’re] stagnant,” Wincelowicz says. “It’s stagnant amongst the constant change. It’s a glimpse of a moment that’s almost immutable. That’s what it is; that’s what we get to look at for as long as it’s available to be seen. That’s the breath. That’s the moment to pause and reflect. Observe. No one’s speaking. There it is.” Looking at the page, it doesn’t escape the attention that the inaugural photo is of the man behind the page itself. Wincelowicz stands in a denim shirt, eyes intently cast toward the viewer as his shadow stretches its dark silhouette across the lawn in front of his childhood home. It’s a fitting introduction to a page that asks Corpus Christians to be exposed to the space around them.

Though the page was conceived years ago, it didn’t gain ground until recently, as Wincelowicz went through periods of crippling anxiety and substance abuse that led him from Austin back home to Corpus, where he survived his last overdose in his childhood home in 2018.

“In that period of substance abuse, I had a series of overdoses. And then that final one, when I woke up, in the days after that, it felt like the world all became novel again. Even the mundane or what we would call ugly things were amazing.” And though that period caused the page to take a detour, coming back, he said, the curation of who to photograph was (and still is) a genuine concern: “We brought it back up and were like, ‘Well, we’ll seek people out for now,’ but then I kind of felt like what I want to move into is a little more impartial. I don’t want to seek people out all the time, because then my subconscious judgment is directing who’s on. I want it to be more random, so that’s kind of part of our transition here: We’ve created a Google form that we’ll post up. I want to share this, and it be motivated that way, rather than it coming [just] from me.” As Wincelowicz simultaneously spins tales of tenacity and trauma, one can see the earnestness in his intentions, the vibrancy with which he views the world around him. The relatability of the human experience thrives within the various landscapes that exist from a single scroll downward, the faces of Corpus citizens providing an invitation into their world, a glimpse of what it’s like to be them for a few seconds.

“That’s life, right? These little connected moments that may not seem connected, but at some point, they accumulate into who we are as individuals,” he said. “And how we perceive them, it’s so incredibly complicated. Everyone is beautiful in their mess, in their imperfections. That’s what I want to showcase.”