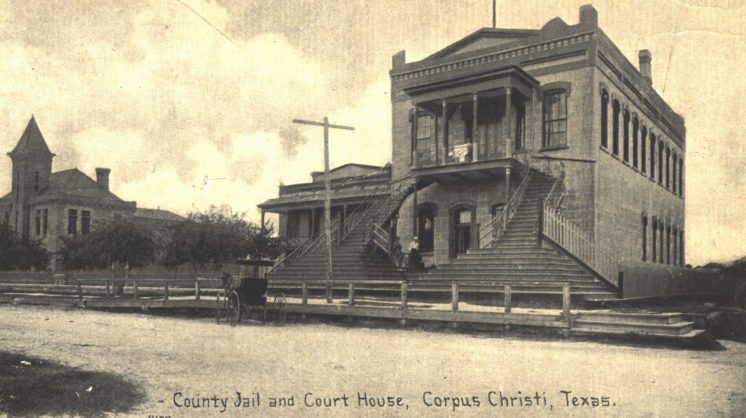 If you reference “the old courthouse,” most locals picture the same building: the 1914 courthouse that stands empty today. But for earlier generations, a different building built on the same property – purchased by the county from Henry Kinney – would have come to mind.

Nueces County was officially organized in 1846, and work began to establish Corpus Christi as its county seat. The early governance of the county took place in county officials’ homes, but they soon needed a building to take care of county business and legitimize the growing county’s government.
Set back at the center of this image is the building designed by Felix von Blucher, which was built in the 1850s at a cost of $4,000. The growing city already needed additional space by 1875, when they built the Hollub Courthouse, named for its designer.  It was built in Greek Revival and Italianate style with a wooden portico and staircase. The previous courthouse continued to be used concurrently, with city offices filling that space, but the Hollub Courthouse’s days were short-lived. Both buildings were demolished to clear room for the 1914 courthouse – the one we today call “the old courthouse.”
The quick progression of courthouses built on this piece of property shows just how quickly Kinney’s little trading post on the Nueces grew into the city we know today.
Share