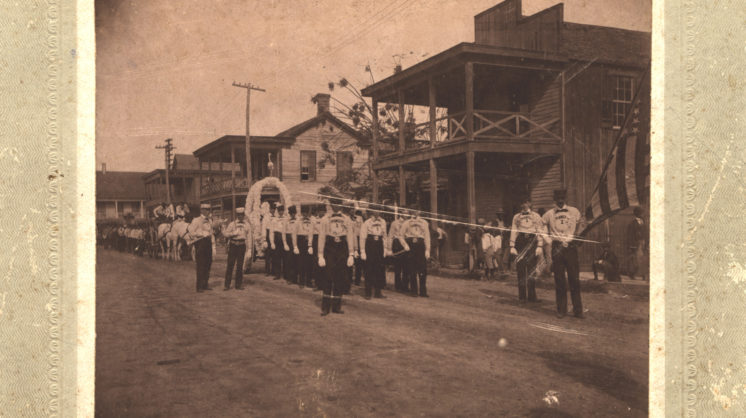 It’s not unusual to see a fire engine take part in parades today, lights flashing, with firefighters waving to onlookers. In early Corpus Christi, the firefighters were the main attraction of the parade, and the community gathered to show its support. Instead of flashing lights, there were dress uniforms and vehicles adorned in oleanders.

After a fire burned the home of William L. Rogers in 1871, he set out to gather support for organizing a volunteer fire company. By the end of the year, they had a small fire engine and a list of volunteers. The next year, they held a parade, ball, and banquet to fund a headquarters for their new Pioneer No. 1 Company. Another was held to celebrate the first anniversary of the company’s founding, and the firemen’s parade became a Corpus Christi tradition.

Through the support of citizens and the City, money was raised to buy their equipment and a bell to hang in Market Hall (present day La Retama Park) to summon volunteers to a fire. The volunteer force grew to include the Lone Star Hook and Ladder Company, which joined the Pioneer company to create the Corpus Christi Fire Department in 1874.

The support given to these early firefighters – all volunteers until 1913 – helped grow and professionalize the organization into the Corpus Christi Fire Department we know today.