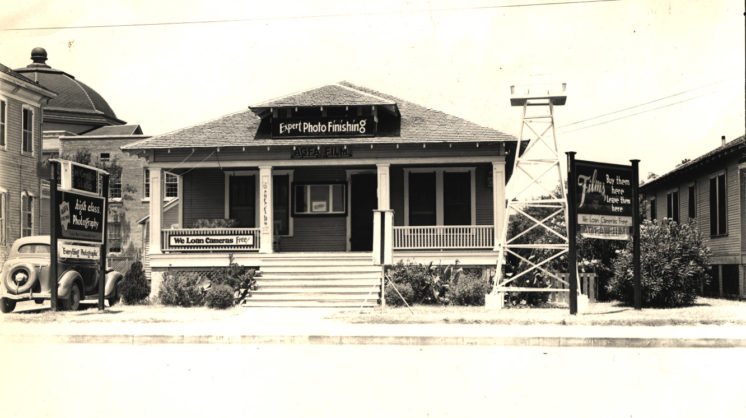 When people walked through these doors, sometimes it was just for a visit to the home of Doc McGregor, his wife, and three children. Other times it was to see a chiropractor. Either way, they could borrow a camera for free, buy film, return the camera and film, and walk out with prints the same day. Over time, the medicine fell to the side and Doc’s passion for photography became his (more than) full-time job.

When his home state made it illegal for chiropractors to practice, he planned to move his family to California to continue his work. Along the way, he stopped in Corpus Christi and fell in love with the city. It was 1929, and the city’s port was new and booming as the city grew at an enormous pace. Doc watched it all through the lenses of his cameras for the next five decades.

His images aren’t just of baptisms, graduations, and weddings, but also of grocery stores stocked with fruit and men stopping for a shoeshine – everyday people doing everyday things. Each day he went out and about in the city taking pictures, then came back to the studio to process them, stamping the back of each print with the date it was processed, so historians know roughly the date each image was taken. He shot an estimated half a million photos, and was purposeful and passionate in his work to tell the story of his city and its people. Corpus Christi’s history is richer because of Doc McGregor’s life and work. Thank you, Doc.