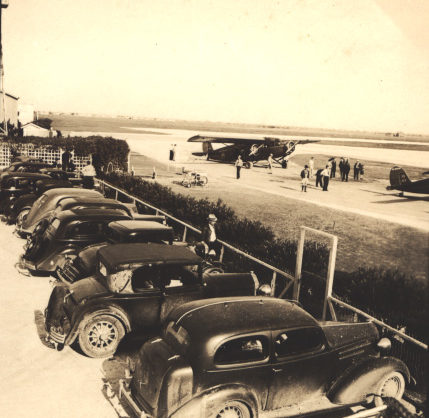 When commercial air travel began in the 1910s, so did talk about when Corpus Christi would build its own city airport.  By the late 1920s, the news was buzzing with feats of flight, including Charles Lindbergh’s flight over South Texas on his nonstop flight from D.C. to Mexico City. In 1928, voters approved a bond to build an airport. Before the runway was even completed, Cliff Maus landed his plane.

At first, the planes seen over Corpus Christi’s skies were part of Maus’s business ventures with partner Bob Maverick. Their airline, Texas Air Company, mainly did crop dusting. New pilots earned their wings at their Southern Academy of Aeronautics.

In 1929, the airport was fully opened for passengers, with flights to San Antonio and Brownsville. Just a year later, more than 200 military and commercial planes landed per month, and Cliff Maus was hired to manage the airport. From demonstration flights to quick stops by famous aviators like Jimmy Doolittle, Maus helped put the Corpus Christi airport on the map.

Maus left the airport in 1934 and lost his life in a plane crash soon after. In his memory, the City Council voted to change the airport’s name to Cliff Maus Municipal Airport.

Eventually, the airplanes of Maus’s time weren’t able to keep up with the demand for air travel. Even though this meant replacing the airport he knew, there’s no doubt Maus would be thrilled with the number of people who experience flights from Corpus Christi International each year.