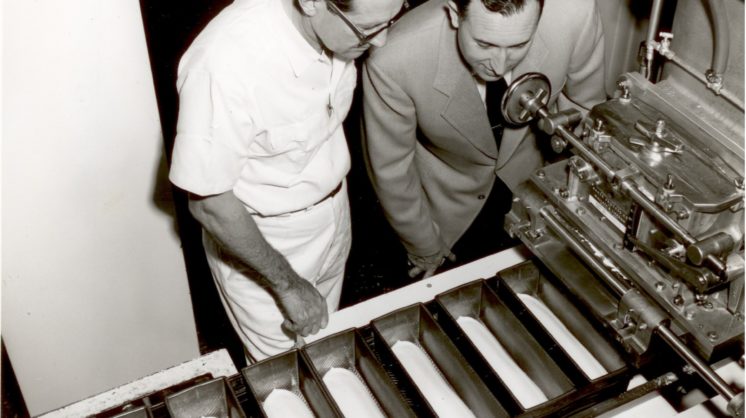 If the smell of baking bread this holiday season brings to mind a visit to or a drive by the Butter Krust Bakery on Ayers, you’re not alone. The bakery, part of the Richter Baking Co. from San Antonio, was an impressive sight, and smell, in the 2000 block of Ayers for generations.

A previous location opened in 1932 was quickly outgrown, and the nearly quarter-million-dollar facility on Ayers was opened in 1938. The oven could bake 1,750 loaves an hour to be shipped across southern Texas by a fleet of trucks. The plant was expanded twice, growing to nearly 300 employees and more than 100 trucks.
Locals who tell stories about the bakery often are recalling memorable moments of their youth. Thousands of schoolchildren filed through and received a fresh slice of bread to sample as they finished their tour. Butter Krust Bakery donated book covers to the schools, which children carefully wrapped around their textbooks each fall.
Today, the smell of fresh-baked bread is gone, but the building remains with its exterior relatively unchanged. After standing vacant since the bakery’s closure in 1997, the building was renovated and opened as a storage facility this year—iconic Butter Krust neon sign and all.
Share