An Interview with Person of Interest Noah Drumright - The Bend Magazine 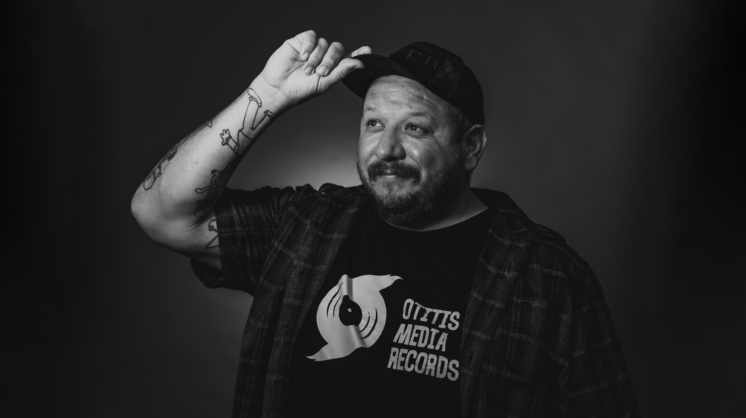 Kylie Cooper: You co-founded, own, and operate Otitis Media Records. Tell me a bit about the label’s origin story.

Noah Drumright: I was always a bit reluctant to start my own record label; it always seemed like a real hassle compared to just writing and playing music. My longtime friend and label partner Chris Puryear convinced me to put out my surf band Total Death Mechanics on our own as our first release, and just see how it went. I had the name Otitis Media Records, which was a tongue-in-cheek reference to an ear infection or earache. Being in the medical field, I thought it was kind of witty. Now if we could just get people to pronounce it right … I never thought it would snowball into what it has become; I’m glad I listened to him.

KC: Your label roster includes musicians from all over the world. How do you go about finding new artists to work with, and what makes an act a good fit for Otitis Media Records?

ND: Back to the beginning of our little label in 2017, we made a social media page. From there, we were approached by a few bands from around the world who were looking for a label to release their music. Chris would forward me the music files the bands would send, and we made a few CDs and a couple of vinyl records to start out. From there, it was pretty much word of mouth as our releases started getting out there. It’s amazing the reach you can get from just messaging on social media. We’ve put out releases from bands by way of Brazil, Sweden, Japan, Russia, China, Italy, the U.K., Argentina, Mexico, and of course the U.S.

We look to put out music that we are into: surf/instro, garage, punk, psych, jazz, hardcore punk … it is a pretty broad spectrum of music genres. The last thing I want to do is get stuck doing only one type of music. I think that sets us apart from many other labels out there. I’m very particular [about] a band’s visual artwork, too. I think the cover of the album should be just as attractive as the music. I should add, a band’s message also means a lot. I have no interest in bands that promote racist, misogynistic, or homophobic propaganda. Don’t even bother with them. KC: What is your first cognizant memory of music?

ND: Some of my earliest memories of music are of my dad playing “Yellow Submarine” by The Beatles, and my mother playing and singing along with Linda Ronstadt records. Both my parents played guitar, and every once in a while, they’d let me pluck on the strings. When I was a kid, there was this ad for a Beach Boys greatest hits LP that you could order, which my mom did for one of my birthdays. So there’s my first vinyl that I owned. Sadly, my uncle “borrowed” it, and I never saw it again. My next music purchase would then be Weird Al’s “Dare To Be Stupid” on cassette tape, which changed my life.

KC: What advice can you give to emerging artists who are trying to get started?

ND: Once you get some songs written, record them, and get them out there. Don’t just sit on them so they can collect dust. Do your best to put your music out on physical media. Anybody can throw something out there as a digital release, but make sure your ultimate goal is to manifest that music on something that somebody can hold in their hand and play on or in something. That is just a personal opinion, really; no offense to digital media lovers.

KC: What is something readers would be surprised to know about the local music scene?

ND: There is life beyond cover bands. There is so much original talent here in this area. I’m sure this goes for every local scene out there. There are so many different genres of music with original composers here that don’t get enough recognition. Hopefully, people start realizing that in the future. Those bands that make and sell those records at their shows put a lot of time, money, and effort into their releases, so purchasing something from a local band means the world to them. KC: What is your favorite thing about working with local bands?

ND: There are so many great local bands, and I would have to say one of my favorite things about working with them is that we can actually go see them play live on a regular basis. We have a pretty great relationship with the few bands we’ve done releases for in our area. As with all our artists, they play a big part in the production process when it comes to getting their project done.

KC: You’re also a musician yourself. Could you talk a little bit about your creative process when writing new music? Do you have any rituals, particulars, or personal procedures you’d care to share?

ND: I usually like to write alone. I’m not a good collaborator, meaning sitting with somebody else and coming up with words always made me nervous, and I’ve never really been able to open up like that. It’s happened, but it’s rare. There are moments when playing with other folks where you start noodling around, and collectively come up with something that sounds cool. But that’s usually the instrumental part of a song, like a riff. Lyrics mean the most to me, and as I get older, when I write them, I feel like every word needs to be perfect. There is definitely something spiritual and very therapeutic to writing a song, which essentially is like writing an entry into a diary, and then pouring your guts out to the listeners. I’ve been writing songs since my teens, and those who know me can see a kind of evolution over the decades from more juvenile songs about drinking and silly stuff to songs about divorce and things a person goes through in their “middle age.” I do usually come up with the vocal melody first and build the song around that, which I’ve been told is “weird.” Thanks to the voice recorder app on phones nowadays, it’s easy to record stuff when it pops into your head. My wife has busted me singing into my phone a time or two.

ND: Well, assuming there is electricity and a means to play them, I would have to say, in no particular order: Anthrax “Among The Living,” The Ventures “Live in Japan ’65,” Melvins “Bullhead,” Roky Erickson “The Evil One,” and Operation Ivy’s LP. KC: Any upcoming projects you’d care to share with us?

ND: We will be releasing several incredible records over the course of the next several months. Of local distinction is a band from Corpus. called Narjeetos. Their self-titled LP is now available, and I highly recommend it! Another is by the band The Mag Seven, which features Brandon Landelius (A Vulture Wake), Donivan Blair (Hagfish, The Toadies), and Bill Stevenson (Descendents, All). It will be my first jazz release, which I’m super stoked about. Moscow, Russia’s own The Thunderbeats have a brand new 7-inch that I’m thrilled about as well. The first double LP I’ve done, “Surf You Next Tuesday 2! The Revenge!” should be out early 2022. This compilation will feature 33 bands from all over the world, spread over two beautifully colored vinyl records, with cover art done by myself. The Fuzziyama Surfers, from Japan, Sys Malakian from Mexico City … honestly, I could go on and on with these. You’ll just have to follow the Otitis Media Records pages and check them out for yourself!