A Vacationer's Delight - The Bend Magazine 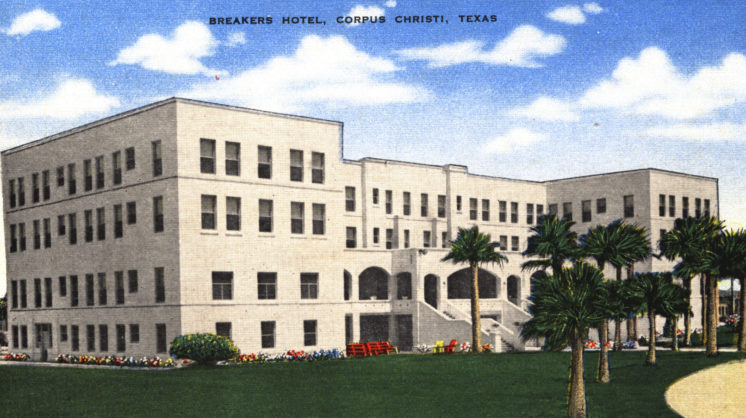 We often remember North Beach for its heyday in the 1920s-40s, with its swimming pool, tourist cottages, and carnival. All of that came after a bustling North Beach – with the city’s first hospital, a country club, airport, baseball field, and hundreds of residences – was nearly leveled by the 1919 hurricane.

Built in 1912, the age of streetcars in Corpus Christi, the Beach Hotel was built to serve visitors to the many attractions lying just outside city limits on North Beach. It was one of three buildings left standing after the storm, and the building that went on to stand the longest. It wasn’t always a hotel, though; it served for a time as a convalescent hospital for soldiers returning from WWI.

In 1927, it resumed its original function, reopening as the Breakers Hotel, and was known for its ballroom resembling a rose garden under moonlight. The Breakers served North Beach through its heyday, and beyond. When the Harbor Bridge changed the traffic flow into North Beach, the hotel saw a decline in business and would never return to its former glory. Several prominent businessmen tried, to no avail, to renovate and restore the Breakers, but three major hurricanes in a decade – Carla (1961), Beulah (1967), and Celia (1970) – signaled an end to the story.

The Corpus Christi Times’ notice of its demolition in November 1970 called it a landmark, and remembered it as “once the pride of Corpus Christi nightlife and a vacationer’s delight.”